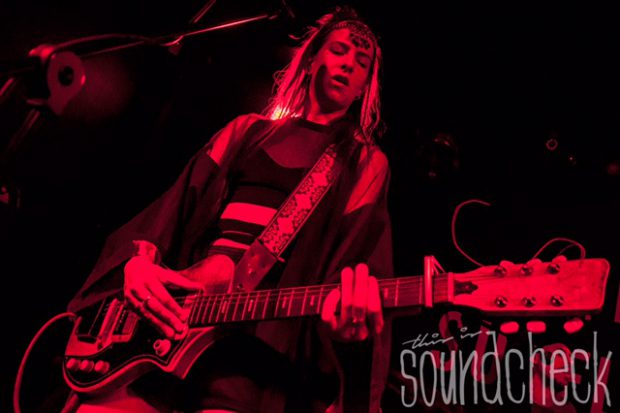 My Baby are the self proclaimed “tribal blues trance band” from Amsterdam who took to the stage on Friday night and produced one of the slickest and fun sets Birmingham has seen for a long time.

With their unique brand of tribal blues, they have been turning heads wherever they have played over the last few years and tonight was no exception. Promoting their latest album, the electric ‘Prehistoric Rhythm’, tonight certainly highlighted why they are being bigged up by everyone who has the fortune of seeing them.

Having been warmed up by two equally talented outfits, the crowd were in a party mood. Opening tonight’s proceedings were the electric duo As Mamas from Evesham. Their short set was incredibly rock n roll and if developed a little more, could see them sail a similar path that White Stripes forged many years ago.

Next up was some magnificent slide guitar courtesy of Wigan lad John Fairhurst. The lad from the North managed to reign in his distinctive accent whilst singing, but his guitar playing was spot on. Another name to keep an eye on for the future.

Finally, at 9:45, the Dutch headliners made their way through the crowd and took up positions on stage. Made up of brother and sister; Cato and Joost van Dijck, on Guitars/Vocals and Drums respectively, and complimented on lead guitar by New Zealander Daniel Johnston.

What followed was 75 minutes of high energy tribal blues trance which saw on multiple occasions, the tiny intimate crowd launch in to a rave. There is a lot of diversity in their music, but tonight relied heavily on tracks from ‘Prehistoric Rhythm’. Opening with recent single ‘Love Dance’, the hypnotic vibes lead by Cato’s vocals and violin stood out. Quite simply, the way the audience was hooked proved that it was a great way to open a set.

Switching swiftly from violin to electric guitar, the band picked up the pace and launched in to renditions of ‘Misty Mountain Top’ and ‘Electrified’. Throughout the set, the band paused only a couple of times to address the audience and introduce themselves.

Songs from their two previous records were few and far between, but renditions of ‘Uprising’ and ‘Remedy’ delighted the audience. Other standout moments were ‘Make A Hundred’ and ‘Sunroof Diesel Blues’, but the highlight was the final two tracks. Mixing a blues rendition of ‘Sunflower Sutra’ in to an all out rave rendition of ‘Ancient Tribe’ which lasted near to the 10 minute mark. By this point there was not a single body not grooving with arms in the air, even those on the stairs were grooving away.

As the track ended and the audience erupted in to sheer delight, their tour manager approached and exclaimed that there was an extra 5 minutes available. Cue the band staying on stage and giving us a final all out blues jam much to the delight of the captive audience.

My Baby are very special. If you get to see their last UK dates on this tour quite simply, enjoy. If they continue at this pace it will not belong before the bigger venues call them on to stage. It’s easy to see why Seasick Steve had them tour with him and why Glastonbury had them play multiple sets in 2016. My Baby are a religion and a revelation, if anything else, they are a breath of fresh air in a world full of nothing but shiny, over-produced modern pop.