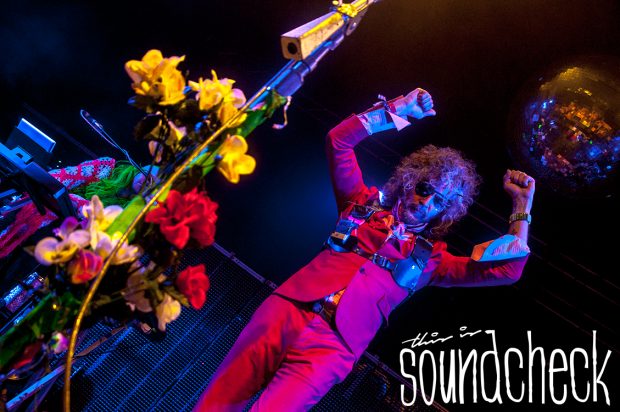 On a warm Saturday evening, hundreds of music lovers were packed in to the o2 Academy in Birmingham for one of the shows of the summer. Oklahoma’s legends Flaming Lips were in town to spread their gospel of joy to all in attendance.

The evening started early at 5pm with Hoopla Blue and Amber Run warming up the crowds nicely. The main support act tonight however, was Public Service Broadcasting. Having just released their brilliant third album ‘Every Valley’, this was a primal opportunity to witness some of the new songs live. Tracks ‘The Pit’, ‘People Will Always Need Coal’ and ‘They Gave Me A Lamp’ sound brilliant mixed with classics such as ‘Go!’, ‘Spitfire’, ‘Theme From PSB’ and ‘Gagarin’. A brilliant support act for the beauty set to unfold.

With various band members from tonight’s headliners wandering on stage to carry out their own sound check, the audience were teased, especially with front man Wayne Coyne waltzing on to say a quick hello then leaving instantly. After a good 20-minutes, the lights dip and the stage becomes illuminated in bright light as the band casually saunter to their positions.

Coyne addresses the crowd and declares what a lovely time to be back in the UK’s second city. He turns to face the band and acts like a conductor by bringing them in a note at a time and letting it die off. After a few moments of this, the band kicks off with opener ‘Race For The Prize’. As soon as the first note is struck, confetti cannons, streamers and giant balloons rain down over the audience and stage. The scene becomes a moment of pure elation as anyone’s issues are clearly wiped away as they got lost in the 7-minute journey through escapism.

To anyone who has not caught the band live, this is a plea to ensure that you do next time they are your way. The whole show is filled with so much love and fun, the band simply ooze confidence and humour. They don’t take themselves seriously, and neither should you. After the explosions of the opening number, second track ‘Yoshimi Battles The Pink Robots Pt.1’ sees an inflatable pink robot, the height of the auditorium, appear behind Wayne as he serenades the crowd. This is all after a huge balloon bubble spelling out “F**k Yeah Birmingham” is waved around from the stage before being thrown into the crowd and ripped apart by people wanting a lettered souvenir.

The madness continues as Wayne disappears from the stage. The band launch in to the opening section of third song ‘There Should Be Unicorns’. Coyne suddenly appears in the audience to the left of the stage and is pulled through the masses a top of a giant illuminated unicorn, throwing more confetti over the people as the chorus kicks in each time. This opening trio of pure, unadulterated madness is just a hint of the brilliance of the band.

Two thirds of the way through the set, the madness continues as they launch in to a cover of David Bowie’s ‘Space Oddity’. As the song begins, Wayne stands inside a huge bubble of deflated plastic. As the song proceeds, the bubble is inflated to reveal a huge zorb. As the band launch in to the change of tempo, he subsequently launches himself over the heads of the audience and rolls over to the mixing desk to finish the song.

To describe the whole show in one review would both be impossible, and would take the magic away from anyone going to see them. Needless to say, the visual highlights are as brilliant as the audio highlights. The short 11-song set manages to fill an hour and a half, and fills itself with plenty more gems which include ‘The Yeah Yeah Yeah Song (With All Your Power)’, ‘The W.A.N.D.’ and ‘A Spoonful Weighs A Ton’.

Coming back on for an encore, Wayne and the band thank us again for coming out tonight and promise to come and see us again soon. They finish off with a wonderful and magical rendition of ‘Do You Realize?’ This sees the audience joining in once again by singing the lyrics out in a giant sing-a-long and being showered in even more confetti. As the band bid us a final farewell and the lights return, the audience are still calling for another.

An epic evening of sheer escapism and brilliance, oh a few more than decent tunes too. Their next UK headlining show will be at the epic Festival No.6 in Portmeirion.