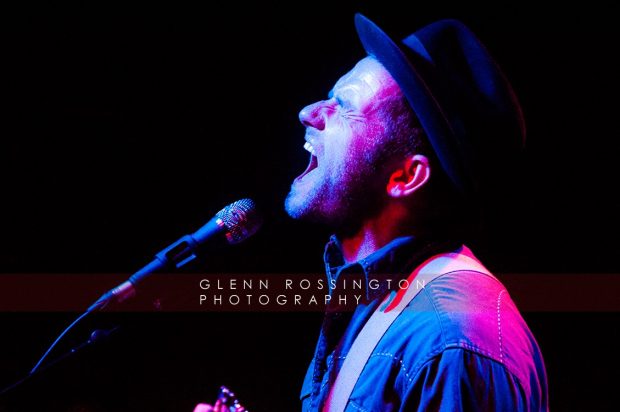 Opening up his latest UK tour, the ever excellent David Ford tonight treated his loyal fans to an impressive set of loud blues-rock, love lost and won tales of endurance in a hot and sweaty room in the heart of Kings Heath.

The crowd were warmed up nicely from local artist Chris Tye who brought a mellow set of tunes to the large audience. ‘Paper Grenades’ and ‘The Unassuming Heart’ standing out, the crowd were warmly receptive to the gentle acoustic sounds.

A few days before this opening night of the UK Tour, David tweeted to say that the show would be described as “Two people in a room trying to make as much noise as possible”, he was not wrong. Opening his set tonight, Ford treated the delighted crowd to a rendition of ‘Armistice’ from his former band Easyworld’s debut album. Within the first minute however, he managed to break a string on his electric guitar, but faultlessly carried on regardless.

David is currently promoting his latest EP ‘The Union’, and not only debuted tracks from this record, but also his forthcoming album ‘Animal Spirits’ due in 2018. His new material slides along perfectly against his back catalogue with tracks such as ‘Downmarket’, ‘Real Damn Slow’ and ‘Animal Spirits’ standing out and showing how versatile a performer he is. Older material such as ‘Pour A Little Poison’, ‘Requiem’ and the beautiful ‘I Don’t Care What You Call Me’ delighted the audience.

Joined on stage by drummer Darren, David’s sound was amplified for those who have seen his previous shows. The extra musicianship made songs such as ‘Hundred Streets’ and ‘First We Take Manhattan’ sound fuller and rockier.

The final song of the night was ‘Why Don’t You Answer Your Telephone?’, the opening track on his latest EP, and blew the roof from it’s foundations. It’s bluesy undercurrent formed the perfect backing to David’s husky vocals and as the track came to it’s intense crescendo, the audience exploded in delight. A perfect evening from one of Britain’s most underrated singer songwriters.