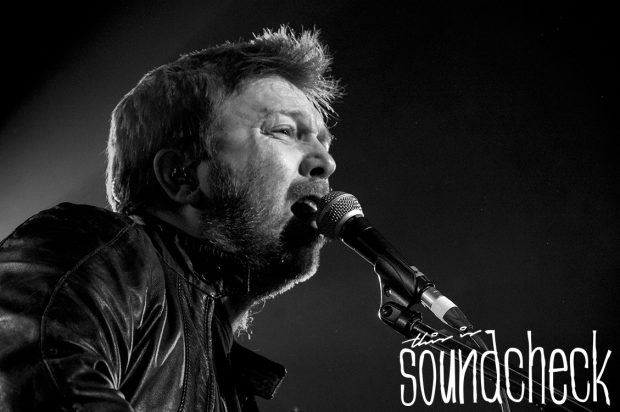 Fourteen years after his last jaunt across the UK with former band Mansun, Paul Draper is set to play the final closing night of his first solo tour.

Walking on stage to a capacity crowd at Birmingham’s intimate o2 Institute 2 otherwise known as ‘The Library’, he greets us beaming full of smiles and raises a pint glass to the air. Accompanied by his band, Paul launches straight in to a slew of his tracks from debut solo album ‘Spooky Action’. ‘The Silence is Deafening’ opens tonight’s’ proceedings and is greeted by die hard fans like an old classic.

Between song banter is brilliant tonight as Draper shows us elements of his comedic side, his softer side and is full of praise for both the audience and his band. The recurring comment tonight is “Well, for anyone who came to a Mansun show will remember we liked to play the b-sides, so as they don’t do b-sides any more so here’s a b-side” which repeatedly causes cheers, chuckles and the odd heckle from the crowd.

After fourteen years out of the limelight, and predominantly out of music (with the exception of an appearance on stage with The Joy Formidable and co-writing tracks for the debut album by The Anchoress – who is playing keyboards for him tonight) it has been easy to forget what a charismatic and brilliant performer Paul Draper is. Watching him play guitar is a joy, and to hear those vocals again, particularly on the odd Mansun tracks that he drops in to the set is a relief.

There are many highlights tonight, mostly from ‘Spooky Action’ and include ‘Don’t You Wait, It Might Never Come’, ‘Feeling My Heart Run Slow’, ‘Friends Make The Worst Enemies’ and new single ‘Grey House’. We even get an acoustic breakdown mid-set where the first Mansun song of the set appears in the form of ‘Disgusting’. The main set closes on an epic rendition of Mansun’s ‘I Can Only Disappoint U’ which causes the audience to participate and create a Birmingham style sing-along.

Returning to the stage for a two-song encore, Paul thanks us again for coming to the gig and helping him to feel comfortable after such a long break. His enthusiasm is brilliant as he cannot stop praising the fans’ support and interaction and also plugs his wider UK tour for next Spring.

As a closing gesture, the roof is shaken to it’s foundations as the encore opens with ‘Wide Open Space’, one of Mansun’s most notorious hits and another highlight from the show. The final track choice shows where he is and how confident he is in his current music by performing ‘Don’t Poke the Bear’, the lead single for ‘Spooky Action’. He becomes the perfect frontman and sings effortlessly and blasts out some chunky guitar like the Draper of old. They say that you should always leave your audience craving more, tonight Paul Draper did exactly that. His UK tour next Spring should be something unmissable.