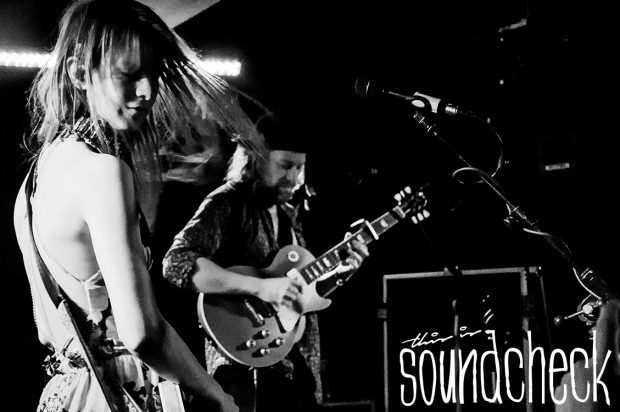 The Amsterdam based trio My Baby returned to Birmingham to bring a second round of their incredible tribal rave blues tunes to the intimate audience of the Actress & Bishop. Having successfully blown away the audience at the Sunflower Lounge back in April, demand for a return was high.

After a quick and slightly lacklustre performance from local band The Borgias, the room seemed to instantly fill up with extra bodies ready for the arrival of My Baby. Just after 9.30, the lights dipped and ‘Haunt Me (Slight Return)’, the closing track on their recent third album ‘Voodoo Rhythm’ was pumped through the PA. Drummer Joost Van Dijck and Guitarist Daniel Johnston arrive on stage and begin jamming along with the track. Daniel announces the arrival of the ‘Spirit Queen’ who is ready to “sing to your souls” as front woman Cato Van Dijck arrives waving her arms to the mantra tune being played as if being controlled by the music. Perfectly encapsulating the character of the album.

As the musical seduction takes over, Cato picks up her violin and the band begin with the charming ‘Love Dance’. As the first notes play and the vocals kick in, the audience are already eating out of the palm of their hand. Most of the room is dancing or swaying along as the track reaches the rhythmic chorus. This is in essence how the rest of the night pans out. Bodies moving and swaying with the rhythms this three piece play out to us, the music takes our souls and dances magically in synch.

As Cato puts down the violin and picks up her guitar, the band seamlessly segue into an older track, ‘Remedy’ before bringing us back to the present with ‘Electrified’. Talking is kept to a minimum in between songs, mainly due to the fact that each song blends in to the next in perfect correlation. We do get each member asking how we are and thanking us for coming tonight throughout the set.

‘Luminate’, ‘Moon Shower’ and the radio hit ‘Cosmic Radio’ relax the crowd and take the audience of a mind-bending trip through melody with each song being welcomed to cheers and wails of pleasure from the captivated audience.

After a brief pause, the tempo is picked up further as they launch in to latest single ‘Sunflower Sutra’. Beginning like a mantra then before you know it, the rhythm has exploded in to a tribal rave. The audience are moving about as much as the band. Even drummer Joost has removed his shirt by now as the temperature has increased tenfold. The brilliantly bluesy ‘Make A Hundred’ arrives next and expands in to a 12-minute jam. There is even a moment where Cato leads the crowd in to a few lines from Fatboy Slim’s ‘Right Here, Right Now’ before the chorus kicks back in. Incredible.

The Amsterdam trio end on an old song ‘Seeing Red’ which follows the rave pattern brilliantly and ends the set on a superb high. As the band leave the stage for a quick shot of cold air in the dressing room, the audience are craving one more. Eager not to disappoint, the band swiftly return for one last round.

Another oldie unknown to many in the audience, ‘Mad Mountain Thyme’ strikes up and sees everyone enjoying themselves, dancing and swaying along as the band jam out for another 7 minute psychedelic trip. As the song ends, it’s incredible to think that a short 10-song set has taken us near to the 90 minute mark. Cato addresses the audience thanking us again and hopes to see us again in the new year.

My Baby are a breath of fresh air and deserve to be bigger here in the UK. In their homeland tickets are scarce for any dates, and within time, the same will happen over here. In the meantime, should you get the opportunity to see this band, go and do so, you will not regret letting them in to your ears.