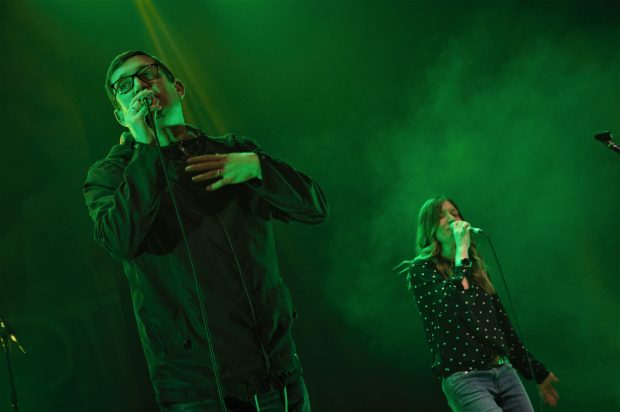 Arriving in style to a packed out Civic Hall, Paul Heaton and Jacqui Abbott hit the ground running from the very first note. What followed was a two hour show of sheer perfection.

Mixing tracks from the latest album, ‘Crooked Calypso’, with hits from their previous albums, and of course, a smattering of anthems from both The Beautiful South and Housemartins archives.

The opening number tonight was the insanely catchy ‘The Lord Is A White Con’ from the aforementioned new album ‘Crooked Calypso’. The upbeat feel enveloped the overall feel for the whole show. It was naturally the past hits which caused the biggest audience reactions. The jubilant ‘Rotterdam’, ‘Old Red Eyes Is Back’, ‘Perfect 10’ and ‘Don’t Marry Her’ from The Beautiful South’s catalogue alongside; ‘Five Get Over Excited’, ‘Sheep’ and the timeless ‘Happy Hour’ from the Housemartins.

There was hardly anyone who wasn’t moving, whether they were standing or in the upstairs seating, everyone was in a jubilant mood and were singing along with the band. The ‘Sold Out’ venue was erupting in to pure elation as the night proceeded. If it was cold and damp outside, then inside it could only be described as a tropical environment. Hot, toasty and sweaty!

Interaction with the crowd tonight ended up being a comedy show as Paul Heaton appeared nervous to begin with but soon found his stride. He could very easily have a side career as a comedian, especially given his sharp wit when it comes to his excellent lyrics. Jacqui Abbott was friendly and as lovely as she has always come across. The audience themselves lapped up the interaction with a few heckles which ended up in laughter.

If you want to see a show which is a masterclass in songwriting and performance, do yourself a favour and go to see Heaton and Abbott at any future dates. Next Summer they are headlining a string of dates with the Forestry Commission and these perfectly crafted tunes will sit perfectly in the late, hazy summer nights.