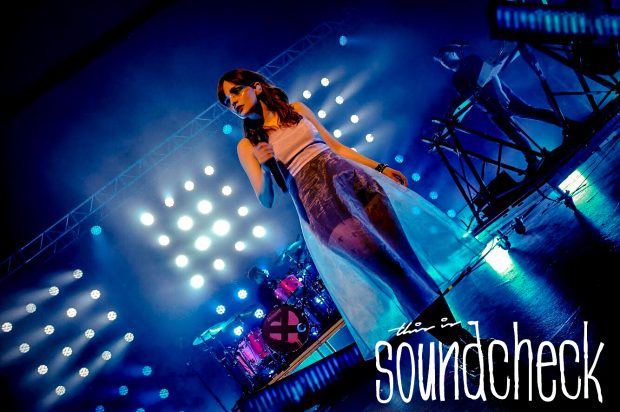 Playing the first of two nights at Birmingham’s o2 Academy, Scottish synth-poppers Chvrches put on an exceptional show which was severely under appreciated by the capacity audience.

Arriving on stage and launching straight in to ‘Get Out’ from last years’ brilliant ‘Love Is Dead’ album, from the off it’s clear that front woman Lauren Mayberry has become the effervescent leader she was meant to be by prowling around the stage, dancing around and interacting with the front rows. A far cry from the shy soul who graced the stage during the first album tours

‘Bury It’, ‘Gun’ and ‘We Sink’ add to the impressive opening section but something is lacking, most notably in the sound. When the band address the audience, they are indecipherable amidst the number of people talking around the venue, this may also be down to the layout of the venue being stood under the balcony.

When Martin Doherty comes forward to take lead vocals for ‘God’s Plan’ and ‘Under The Tide’, the majority of the audience seem to take note and the atmosphere changes up a gear. As Mayberry returns for ‘Miracle’, the gig becomes the live event it was meant to be. Audience singing the words back and the sound seems to have been sorted out.

The rest of the show is peppered with many highlights; an incredible punk rock performance of ‘Science/Visions’. Rocked up renditions of ‘Forever’ and ‘Recover’ bring the audience to life. The band take a moment to address the fact that they haven’t played in the Second City for a long time and apologise stating that they hadn’t forgotten us.

The end of the set begins with one of their best singles; ‘Leave A Trace’ which sounds glorious followed by the techno stomp of ‘Clearest Blue’. The track builds and the final drop is arena worthy as the foundations shake around the building.

The band leave with a impressively loud call for more from the capacity crowd. They oblige and return for a two-song encore starting with the classic ‘The Mother We Share’ being crooned by all in the venue. The final ‘Never Say Die’ becomes a massive call-to-arms and a celebratory end to the night which in these turbulent times, could even be seen as a bold political statement.

Chvrches played with a confidence that has been missing in previous live shows and only proves that the confidence builds with experience. Amid the sound issues, they battled through and gave it their all which is admirable. Despite the talkers in the audience, the majority loved their Friday night out and the Scots certainly gave the perfect start to the weekend.