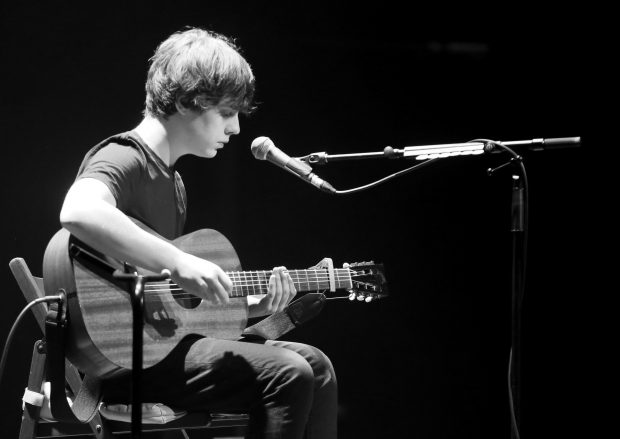 Reviews of Jake Bugg’s acoustic tour have spoken warmly about a coming of age for Nottingham’s finest export since Brian Clough’s speedy dismissal from the Leeds United managerial post in the 1970s. Once the East Midlands’ Bob Dylan, and often compared vocally with Alex Turner, dispatches now revere Bugg as the newly rejuvenated and reconditioned Glenn Campbell. For gentility, his Warwick Arts Centre performance compared favourably with this country legend and it certainly suited the broad demographic of the audience, but there is always a delightful vigour and sting in Jake’s live performances which did not disappoint.

Six years into his travails – with four outstanding albums under his belt and apprenticeships in live performance, songwriting and recording in Nashville, and acclaim as a new messiah from the musical press – tonight’s headliner, who presented himself as a really humble, pleasant guy, showed a presence and maturity on stage that entranced his audience; once again, at a tender age of 23, Bugg proved brilliance defies any age restriction. It really was all generations in harmony under one groove.

With the acoustics as crystal clear and perfectly balanced as you would wish, thanks to outstanding wizardry from the technical team on the mixing desk, with stand out performances of ‘Indigo Blue’ and ‘In The Event of My Demise’, Jake Bugg’s excellent set teased back and forth between his trademark frenzied guitar-picking, rapid fire lyrics and laidback, lilting harmonies, all of which left his audience at Warwick Arts Centre’s Butterworth Hall spellbound.

In truth, the spell had been cast within the first moments of his opener ‘How Soon The Dawn.’ Half a dozen songs in, some of the audience took tentative steps to clap along, otherwise the Hall savoured every note, every word and every echo with demure respect, applauding keenly but politely in between songs.

There are quite clearly two Jake Buggs. Warwick received the charm of the wintry wrap up warm version, while later this year, his Festival crowd’s experience of Jake, complete with band, will be very different. Drawn on whether he missed his band on the tour, Jake hinted at some loneliness being sole focus on stage, and he was totally correct in saying the solo acoustic show would not translate into a Festival field! What he appeared to miss, the crowd was very happy to appreciate though and his delivery was perfect throughout.

Drawing material almost exclusively from his debut album and last year’s outstanding ‘Hearts the Strain’ – with a just quick dip into ‘Shangri La’ and passing over his ‘difficult’ 3rd – Jake kept his excellent cover of ‘Wichita Lineman’ (a 2018 Independent Record Store Day release on 7”) under wraps for another night, turning his cover indulgence for Warwick to his now familiar Neil Young track ‘Old Man’.

In the manner of Laura Marling, there was no encore, just a stunning set delivered with passion and pride. Jake’s response to all calls from his fans to play certain favourites was assertive and good-humoured. He convinced one woman that if he were to take up her suggestion without any prior rehearsal, this attempt really would be a disappointment, plus he would have to ‘google’ his lyrics!

Earlier, with sore throat and (medicinal) whisky in tandem, Georgie had completed a 30 minute set that drew the keen attention of the auditorium and prompted a fulsome queue afterwards crowded around the merchandise table. Georgie’s mantra is that a song-writer has to be a storyteller and her eight song strong set delightfully proved that school of thought. Her cover of The Ronettes’ ‘Be My Baby’ and then her own love song ‘That’s When It Feels Like Love’ were just two of a number of highlights from a warmly received set.