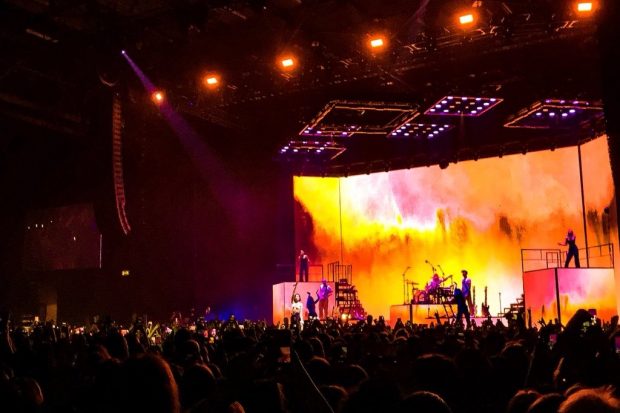 In the same week as hitting the number one spot in the Singles Chart with Calvin Harris (‘One Kiss’), chart sensation Dua Lipa arrived in Birmingham to play to her biggest UK audience to date at the Second City’s Genting Arena. After playing a sold out show at Birmingham’s o2 Academy last October, it was interesting to see whether she could make the jump and pull off a 15,000 capacity show. Without hesitation, she nailed it.

After a well received set from support act Col3trane, a huge curtain was erected around the stage to add to the suspense of those waiting to see the starlet perform. Bang on 9pm, the lights fade and Dua’s voice speaks out around the arena; encouraging us to “Lose Ourselves” and to “Remember to let no body tell you how to act tonight as we are all one”. With moody flashing lights illuminating shadows of her band over the curtain, ‘Blow Ya Mind (Mwah)’ begins as the silhouette of Dua becomes visible for the first time. As the chorus kicks in, the curtain drops and the arena erupts as she is finally there for everyone to see.

Over the next hour and a half, quite simply we are treated to the “Show of the Spring”. Highlights from her “Self-Titled” debut album are blasted out as the audience literally lose themselves with every note played. Throughout the set there are a couple of covers ‘My Love’ by Wale and ‘Scared To Be Lonely’ – her duet with Martin Garrix both stand out and become her own. Dua and her band are joined at regular points by a group of dancers which adds a new visual element to her performance.

During ‘Lost In Your Light’, Lipa climbs on top of an elevated part of the stage and is enclosed inside a cage made up of light beams. Single ‘Be The One’ sees the young star come forward from the stage and climb on to the barrier of the front rows. As the song breaks down, she divides the audience and encourages each side to become louder than the last before the song kicks back in. ‘New Love’, ‘Homesick’ and a stunning ‘Hotter Than Hell’ sound massive ringing out through the arena. By the time ‘Begging’ closes the main set, the arena is filled with so much love and pride for the pop star, it seems unquestionable that there is an encore.

Returning to the stage with a gleaming smile, ‘IDGAF’ erupts as the whole room find their feet again after a few minutes break. The lyrics are being sung back to her word perfect and despite the set dance routines, you can see the pleasure across her face courtesy of the giant video screens. The final track of the night is of course the massive ‘New Rules’. It has been a very long time since a pop song has sounded so defiant and cultural, but this generation now has their anthem. Not only does the entire audience sing the song back to her, but even parts of the seated arena are bouncing along just as much as the standing area. Sheer elation fills the room as Dua Lipa bids us a final farewell.

Dua Lipa may still be the “new girl on the block”, but what an impact she has made. With a performance of this quality, it’s easy to see that her career has now been set for a long time to come.