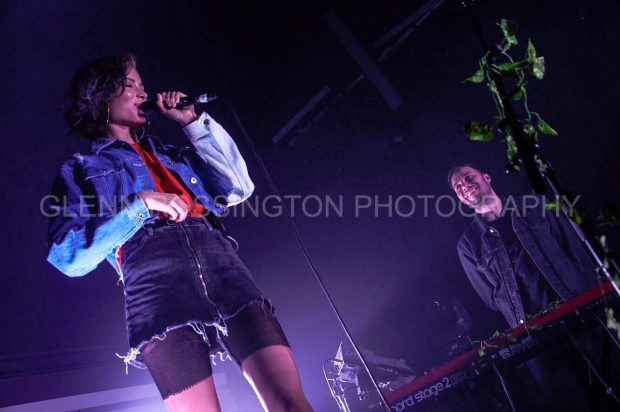 It’s not every day that you have the pleasure of witnessing an artist develop in front of your eyes, but this gig was one of those rare moments. Arriving on the scene back in 2012 with her EPs ‘The Apple Tree’ and ‘Boy’, Scottish songstress Nina Nesbitt has now grown in to a mature star – a far cry from the acoustic pop of her early days.

During a mini heatwave, the temperature in the intimate setting of Birmingham’s o2 Institute 3 was rising fast. Nina arrives on stage accompanied by only a keyboard player situated at the rear of the stage. With a gorgeous electric feel, she launches straight in to a new number ‘Sacred’. Her voice sounds velvety with a subtle raw undertone. This is a theme that runs through her new material, and one that sets her apart from her contemporaries.

Her well-received comeback single ‘The Moments I’m Missing’ encourages a mini sing-a-long from the front rows. Whilst the song runs its’ course, Nina is singing whilst playing a second keyboard set up stage left. Heading back to centre stage, she introduces us to the keyboardist and begins to explain the meaning behind the next track. This is the first of many times tonight she opens up about the meanings behind certain songs. ‘The Best You Had’ is an ode to a past relationship and the perils of “online stalking your ex”.

As well as the beautiful new songs on display tonight, we are also treated to a couple of choice cuts from her 2014 debut album ‘Peroxide’. ‘Noserings and Shoestrings’ is given a delicate solo acoustic touch as she brings her black guitar to the front of the stage, a little nod to the old Nina. ‘Chewing Gum’ shows off her impressive vocal range as the high notes are belted out in a classier style than Adele could manage. ‘The Apple Tree’ and ‘Mr C’ close the main set and stand out as the anthems to those early days.

Returning for an encore, she kicks off with the joyous ‘Stay Out’ which again sees the room joining in for a fun-filled sing-a-long. ‘The Hardest Part’ arrives next before closing the show with her recent single ‘Somebody Special’. Nina promises to come and see us again and thanks us for coming out to see her on a Friday night.

Having followed her career since the early days, its a joy to see how Nina Nesbitt is growing and developing as an artist. Her new mature sound is one that should keep the older fans happy whilst also gaining her some new onlookers. With a new album out later this year, the future is certainly looking bright for the young star. She certainly is ‘Somebody Special’ indeed.