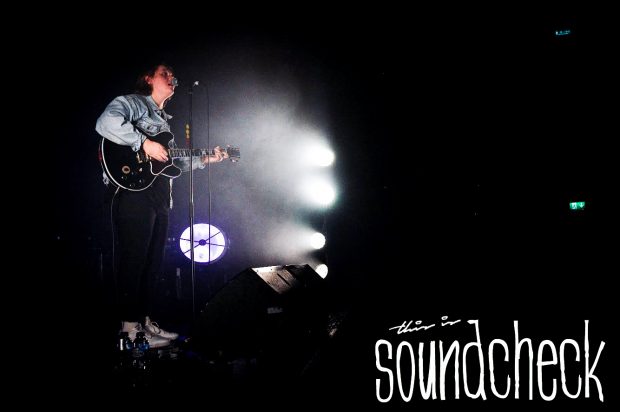 You may not be familiar with the name yet, but the new guy making waves in British music, Lewis Capaldi is sure to become a household name alongside the likes of Tom Walker, Tom Grennan and tonight’s main support act, Nina Nesbitt.

Promoting his new release ‘Breach EP’ which contains the new single ‘Someone You Loved’, Capaldi and his band arrived on stage in Birmingham in explosive fashion. Launching straight in to a high energy performance of recent single ‘Grace’, the show did not disappoint.

Supporting Lewis tonight was Northampton singer-songwriter Billy Lockett who has just completed a huge tour with prog legends ELO, and Scottish singer-songwriter, Nina Nesbitt. Lockett provided a short yet beautiful set from behind his piano which was welcomed well by the swelling audience. Tracks like opener ‘Thinking About You’, ‘Beggin” and ‘Empty House’ were delicate and powerful all the same. Set closer ‘My Only Soul’ received a thunderous round of applause as the Northampton born singer thanked the audience and departed.

Nina Nesbitt is no stranger to our pages, and tonight provided a short six-song solo set mixing acoustic guitar and piano as she previewed tracks from her hihly anticipated debut international album release ‘The Sun Will Come Up, The Seasons Will Change’. Nesbitt’s vocal range is stunning and the poppiness of ‘Somebody Special’ shows this off no end. Old single ‘Stay Out’ still sounds as fresh as the first time we heard it, and ‘Is It Really Me You Are Missing’ is heart breaking. A random yet welcome cover of Britney Spears‘ classic ‘Toxic’ shows off her falsetto beautifully. ‘The Best You Had’ is another heart breaker but makes way for her recent smash ‘Loyal To Me’ to close the set. Complete with audience participation and an acoustic breakdown, with confidence radiating from the young star, it will not be long before Nesbitt herself is selling out the Institute.

After the stunning opening of ‘Grace’ which sees Lewis Capaldi roaming the stage with the confidence of a young Richard Ashcroft, he picks up the guitar and launches in to the upbeat ‘Mercy’ before epic slowburner ‘Headspace’ completes the opening trilogy.

For somebody who has only placed 7 songs out in the world at the point of tonight’s gig, Lewis Capaldi is a star. Having sold out the majority of his big venue dates is a massive achievement in it’s own right, add in to that Capaldi’s honest charm and hilarious banter and you have an A-class show. Being Saturday night and a true Scotsman, Capaldi regularly asks us whether we are “up for getting peshed” which is greeted in the Brummie tradition of cheers.

With a set peppered with nothing but highlights, one crowning moment comes five songs in as Capaldi welcomes Nina Nesbitt back on stage for a duet on ‘Rush’. ‘Don’t Get Me Wrong’, ‘Figure It Out’ and the gorgeous ‘Hollywood’ also shine. The delicate ‘Lost On You’ however, is certainly lost on some towards the back of the venue in a sour moment when those struggling to listen to the tenderness are interrupted by an argument breaking out, which is diffused swiftly. No pun intended, but the song was certainly lost on those involved.

Lewis addresses the audience on his hatred at gigs that “have the moment where the act will pointlessly walk off stage and then come back for an encore” before launching in to a stunning rendition of ‘Fade’. Final song of the night is ‘Tough’ which sees the 3,000 strong audience singing along in unison before which a cheeky grin and a nod to his earlier comment, Capaldi and his band disappear. The encore begins with his keyboard player teasing the crowd with a mini solo before Capaldi arrives back and launches in to the final performance of ‘Bruises’.

Lewis Capaldi may not be known yet by the masses, but by this time next year, I am sure he will be a household name, selling out bigger arenas and will have had a huge Summer Festival season under his belt. Next time he tours, do yourself a favour and treat yourself to his show.