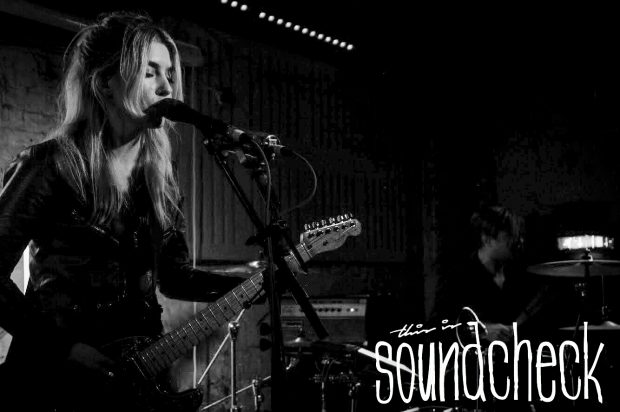 In the week that Laura Mary Carter and Steven Ansell return from a five year gap, releasing their fifth album ‘Get Tragic’ and their first to grace the top 40 album chart, Blood Red Shoes are back in Manchester to play an exceptionally intimate venue.

Warmed up by the gorgeous blues stylings of John J. Presley, the packed crowd welcome Blood Red Shoes to the stage like the lost heroes they are. Expanded from the duo to a four piece, the band open up with ‘Elijah’, the stomping closing track from their new album. First impressions of the new band are that they sound beefier and energetic.

The dance-fuelled ‘Bangsar’ arrives next and sees the first of a few mini moshes throughout the night. ‘Howl’ completes the opening trilogy and the two new members exit the stage to leave Ansell and Carter to play through some older numbers.

‘I Wish I Was Someone Better’, ‘The Perfect Mess’ and ‘Cold’ remind us why we fell for the duo in the first place. Ansell’s drumming is perfect, punky and loud – and also a great new drum mat to boot! Carter’s riffing proves what an underrated guitarist she is. Both talented and sublime too when it comes to lead vocal duties.

The opening riff to ‘An Animal’ launches another energetic reaction from the crowd as the song reverberates around the tiny underground venue. ‘Don’t Ask’, ‘Red River’ and ‘Je Me Perds’ are equally impressive as it is hard to avert your eyes from the duo, watching their every move on stage.

The new members return to the stage as new single ‘Mexican Dress’ gets an airing, clearly a new live favourite amongst fans. ‘Eye To Eye’ and ‘God Complex’ complete the main set. The band exit the stage and return moments later as the audience clearly will not let them leave without an encore.

A slightly shorter than usual version of ‘Colours Fade’ is the final song of the night (short only due to the venues’ strict curfew) but still rocks hard as all four band members blast the track out in typical punk fashion.

A few days later, the album would crash in to the top 40 album chart and proves again that decent guitar music is not only a necessity, but very much needed in this day and age.