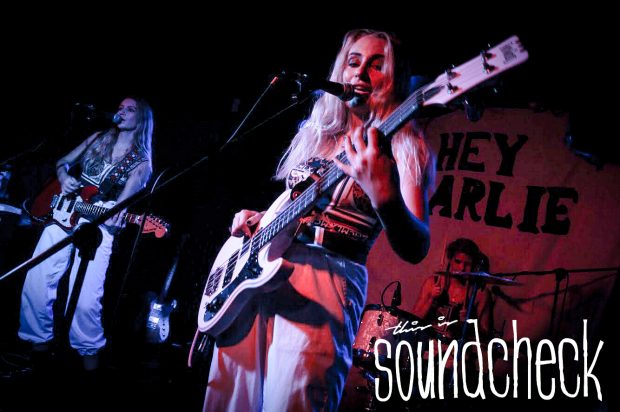 On a cold and damp night in the centre of Birmingham, the Sunflower Lounge is the home tonight to one of the most exciting bands currently on the circuit. London’s Hey Charlie are in the middle of a short UK Tour promoting new single ‘Bad Things’.

After exciting support slots from Deus and Free Galaxy, Lizz, Sophie and Lauren make their way through the crowd and launch straight in to opening track ‘She Looks Like A Dreamer’. Filled with chunky guitar crunches reminiscent of All Time Low and early Blink 182, these young ladies mean business.

The whole set is peppered with an exciting dynamic that is hard to come by in the modern music world. The whole performance is flawless. The duelling vocals shared between Lizz (guitars) and Sophie (bass) work in perfect harmony.

Previous singles ‘Hey’ and the dreamy ‘Young & Lonesome’ already have the majority of the audience singing along. But it’s the newer material like ‘Electric Dream’, ‘Heartbreaker’, ‘Not Together’ and ‘Annabella’ that wow. The latter being a rock n roll marathon that really stands out and leads epically in to previous single ‘Love Machine’.

The beat of the trio, Lauren, is an absolute powerhouse on the drums and backing vocals. She takes a moment to say how she loved having a walk around the city earlier on despite taking a tumble and bruising her arm, yet still pounds the drum kit like there is no tomorrow.

Guitarist Lizz is an underrated guitarist and her chunky heavy riffs drive the band through the energetic set. We even get a moment where Lizz and Sophie are lying on their backs across the stage riffing away without a care in the world. Lizz’s stage attitude comes to the fore during ‘Love Machine’ as the guitar is ditched and she leaps in to the crowd to sing in to the audiences’ faces.

Sophie is the energetic bassist who is pogoing and lunging around the stage whilst joining in on vocals throughout. At one point she is playing bass in the crowd and hear bass almost takes the camera out of our photographers’ hands!

By the last track ‘Cheer Up Princess’ rolls around, the entire room is bouncing and moshing as these young ladies show us how to rock. It’s the kind of song where you imagine instruments being smashed as the feedback at the ends growls from the speakers in a symphony of chaotic pulses. The girls come to the front of the stage and pose in their traditional ‘heads down, hair dropping’ stance before coming back for an encore.

The show would not be complete without a performance of current single, the gorgeous ‘Bad Things’. A slow burning rock gentle with a solo so euphoric that Johnny Buckland would be proud of. With a final conclusion, the performance is over and the girls retreat from the stage and head straight to the merchandise desk to meet the fans.

Hey Charlie have it all. Potential, punky tunes, rhythm, attitude, performance and great personalities. The fact that they are in control of their own organisation and promotion of a well-sold UK Tour says it all. These girls deserve to go places and we are definitely craving more already!