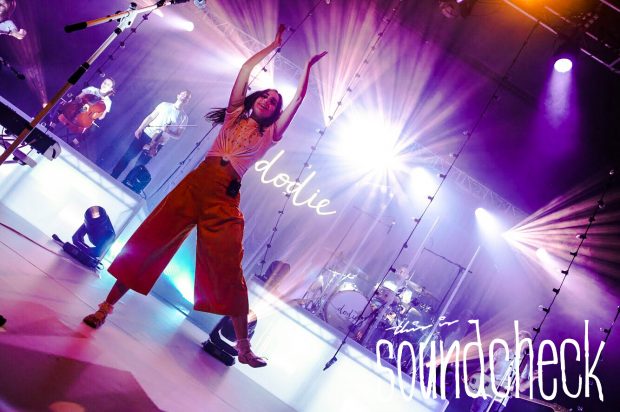 Not being overly familiar with Dodie’s work, this was a gig of unexpectedness, unsure of what to expect but highly surprising in the greatest sense.

The young singer-songwriter arrived in a cloud of dry ice as she stands at the rear of the stage launching in to a gentle arrangement of ‘Arms Unfolding’. What follows is a show of great production in what I am calling “Dolly Pop”. That term is not meant in a derogatory way, or a reference to Dolly Parton, but instead the stage mannerisms mimicking that of an old toy come to life.

The set is full of pop wonderments that echo the cheekier side of Lily Allen mixed with the claustrophobic performance from Marina and The Diamonds. ‘Monster’, ‘Burned Out’ and ‘Rainbow’ are great upbeat anthems that show off Dodie’s songwriting and gentle charm. The gorgeous piano led ‘If I’m Being Honest’ is an ode to those who are too shy to tell their crush that they are cute, something we can all identify with at some point in life.

Following in the footsteps of Ellie Goulding, Katy B and even Ed Sheeran, Dodie started as an online sensation that suddenly exploded in to a large fanbase and devoted following. The audience is made up in the majority of younger devotees, with a handful of parents at the edge of the crowd foot tapping and nodding along throughout.

‘Sick of Losing Soulmates’, ‘6/10’, ‘Guiltless’ and the final awesomeness of ‘Party Tattoos’ are all highlights throughout the main set tonight. Dodie mixes from being a gentle pianist, to being a guitarist and prowling the stage with her trademark poses, interacting with the audience on a personal level.

The encore is comprised of ‘When’, ‘Absolutely Smitten’, ‘Would You Be So Kind?’ and the finale of ‘In The Middle’. By the final notes, the virtually sold out main room show’s audience are up on their feet partying hard to the fantastic dolly pop sounds.

Dodie may still be crafting her game and not yet a household name, but if the path she continues on remains the same, then the future is bright for this young starlet.