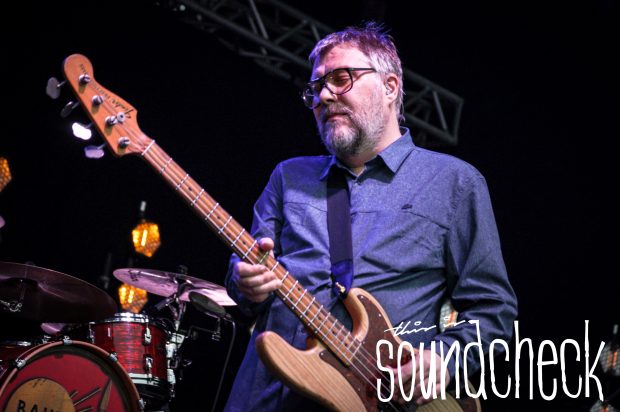 In 2010 the UK music scene mourned the loss of one of the most era-defining experimental Indie bands of the last 20 years when Doves announced their immediate hiatus. Jimi Goodwin, Andy and Jez Williams went silent before solo projects were announced. Goodwin released and toured his much respected solo effort ‘Odludek’ in 2014 followed by the brothers Williams forming Black Rivers and releasing their Self Titled album in 2015. Here follows four years of silence until the start of 2019 when Doves announced they were to reform for a series of gigs this year.

After a successful comeback gig in March for The Teenage Cancer Trust and a handful of festival dates, nothing else had been announced. Then a duo of gigs announced in Hull and Birmingham suggested that there could be more brewing behind closed doors.

On a very wet Sunday on the outskirts of Birmingham City Centre, a good few thousand fans descend upon Perry Park ready to receive a lesson in brilliant British Indie music. The only downside to the day despite the rain, is the bizarre choice to share the location with the massive dance music event ‘Made’.

First on the bill are local heroes The Twang who deliver a set of classics; ‘Barney Rubble’, ‘Either Way’, ‘Paradise’, ‘Two Lovers’, ‘Cloudy Room’ and ‘Wide Awake’ alongside a couple of teases for their forthcoming new album in the form of ‘Dream’ and ‘Everytime’.

Liverpudlian legends The Coral are up next and with the rain beating down heavier, launch straight in to ‘Jacqueline’ and ‘Pass It On’. The hits keep coming with ‘Bill McCai’ and the summertime feel good jam ‘In The Morning’. The Coral play effortlessly and the rain begins to die down, leaving us only with a very cool breeze. ‘Holy Revelation’, ‘1000 Years’, ‘Reaching Out For A Friend’ and the aptly titled ‘In The Rain’ show further depth in to latter day Coral and further prove why they are still an important act in the UK live circuit. Their set ends with the duo of ‘Goodbye’ and a final rendition of ‘Dreaming of You’ which leaves the wet audience on a high.

With the rain pausing for a while, the anticipation is growing as the first of two legendary acts now graces us with his presence. Johnny Marr takes to the stage and launches straight in to new track ‘Armatopia’ before bringing on the first of many singalongs with a rendition of ‘Bigmouth Strikes Again’. We are treated to a handful of his solo tracks: ‘Day In Day Out’, ‘Hi Hello’ and ‘Easy Money’. The rest is made up of tracks from both Electronic and of course, The Smiths. ‘Getting Away With It’, ‘Get The Message’, ‘How Soon Is Now?’, ‘This Charming Man’ and brilliant finale of ‘There Is A Light That Never Goes Out’ ring out across Perry Park. Some may argue that Marr shouldn’t be taking the vocals on these tracks, let alone play them without Morrissey, the fact that the audience take the lead on most of the tracks is the reason why he should.

Finally, the time has come for Doves. Walking on to the stage to a rapturous applause and heavy rain, The band are welcomed like long lost heroes as they glide effortlessly in to ‘Firesuite’, the epic bass-driven instrumental that allows the band time to take in the atmosphere. We get a brief “Hello Birmingham” from Jimi as they segue in to the glorious ‘Snowden’.

What follows is a 70-minute gig of epic proportions. Hits such as: ‘Black And White Town’, ‘Words’, ‘The Last Broadcast’, ‘Kingdom of Rust’, ‘Pounding’ and the beautiful ‘Caught By The River’ not only cause mass singalongs from the large crowd, but add further evidence to what a phenomenal band Doves are and why in the current musical climate we are pleased to have them back.

The encore begins with their 1998 classic ‘The Cedar Room’ which takes us on a 10 minute chilled out rock journey. ‘There Goes The Fear’ is the celebratory ending every gig needs. Filled with elation that takes you to another plain. But instead of being the traditional set closer, tonight we get a bonus track for our efforts of dealing with the weather elements to see the returning heroes. As the band bid us farewell and promise that we will see them again at some point soon, we are transported to a pre-doves era as they launch in to a spontaneous rendition of ‘Space Face’. The Sub Sub classic Hacienda tune from their dance band days. Much to the delight of the audience and seems fitting having spent the afternoon sharing with the Made Festival.

Doves offered a masterclass in British Indie Rock and Dance which was welcomed by the adorning crowd. A welcome delight to have the band back on the live circuit, lets hope it is not too long before we get another chance to see them again.