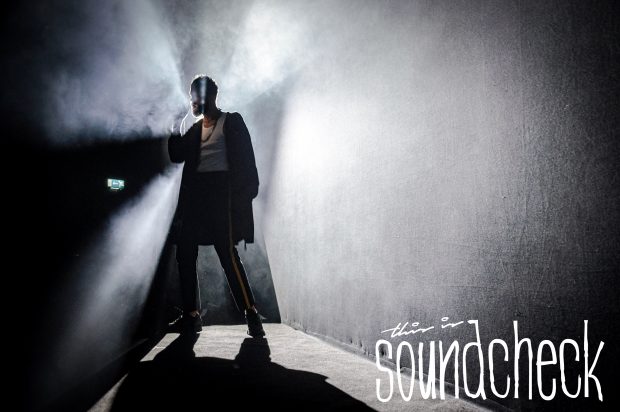 For those not in the know, The S.L.P. is a solo project from Kasabian’s guitarist and song-writer Sergio Pizzorno. If any member of the audience were here hoping for a few hits from his other band, then they were to be left disappointed. Tonight is all about Serge.

With the band blanked out by a black cloth forming an open triangle performing area, tonight the spotlight is firmly on the man of the moment. Serge first appears behind the sheath with just a single light on him as he launches in to ‘Meanwhile… In Genova’, the predominantly instrumental track from the self-titled debut.

As second track ‘Lockdown’ begins, we see a very different side to the Kasabian member. Without an instrument to hand, Serge comes to the performance area and gives us 60-minutes of a mixture of rock n’ roll which dabbles in to 90’s influenced dance and rap.

Serge becomes a full on frontman, prowling around the stage, reaching in to the front rows and even setting off confetti cannons. Although the stage lighting is minimal, his show is visually arty. Playing with the large shadows across the blackout sheaths, Serge is not just putting on a show, he is putting on a performance.

‘Favourites’, ‘Nobody Else’, ‘The Youngest Gary’ and ‘The Wu’ showcase his song writing and mix of styles that gave birth to the record. It is a bizarre show from the outside, but the audience give him their all. Singing along to every word and embracing the new style on offer. By the time ‘(((Trance)))’ closes the show, Serge is in the middle of the standing crowd loving the attention and beginning the Saturday night party for many as only he knows how.

With only 11 tracks performed, that was all that was needed to shake away the Kasabian tag and to realise that The S.L.P. have what it takes to continue if ever Kasabian go on a long hiatus.