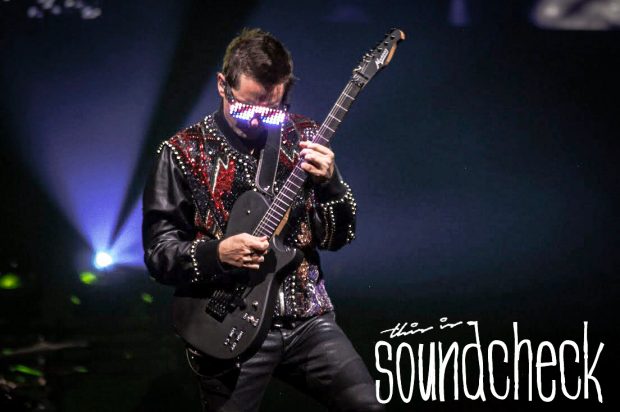 Arriving in the centre of Birmingham after a Worldwide Tour, Muse brought their cosmos blasting stage spectacle to the rather intimate (for them) setting of the Arena Birmingham for their last UK Tour date. Having completed two Sold Out nights at the o2 Arena in London, Birmingham was to be the closing section of these current UK dates.

Kicking off proceedings were tonight’s support, Nothing But Thieves. The Southend-on-Sea rockers who previously supported Muse on their Drones UK Tour back in 2017. They warm the crowd up perfectly with their blend of alt-rock musings. Led by frontman Conor Mason, the band take us on a swift journey of their back catalogue including tracks such as: ‘Forever And More’, ‘Wake Up Call’, ‘Trip Switch’ and a rousing closing version of ‘Amsterdam’.

With the capacity audience anticipating the arrival of the Devon based rock leviathans, the atmospheric between band music was fuelled by 80’s synth sounds mixed with neon lights shining through layers of dry ice. When the arena lights dip, the audience come to life as some faceless neon dancers brandishing saxophones enter the stage and head to the centre of the stage extension within the front rows of the standing area.

Muse drummer Dominic Howard appears with a ginormous bass drum on the left of the stage, with bassist Chris Wolstenholme on the right. New track from recent album ‘Simulation Theory’, ‘Algorithm (Alternate Reality Version)’ begins and Matt Bellamy‘s vocals reign out across the arena. As the chorus kicks in, Bellamy appears from below the stage atop a riser wearing an illuminated Thanos style glove which emits lights and lasers across the arena before taking on the guitar solo and running to join his bandmates as they segue straight in to ‘Pressure’.

What follows is a 90-minute epilogue of rock n’ roll drawing heavily on tracks from ‘Simulation Theory’ but mixed perfectly with older hits from their collection. Every track was a highlight, but standouts were; ‘Psycho’, ‘Uprising’, ‘Plug In Baby’, ‘Madness’, ‘Take A Bow’ and ‘Starlight’.

‘Supermassive Black Hole’ saw the venue erupt as Wolstenholme’s bass line took command leading to a huge singalong from the entire crowd. ‘Hysteria’ drew an even greater response again as Wolstenholme takes centre stage and his furious bassline comes to life. The techno inspired ‘The 2nd Law: Unsustainable’ is electrifying as Bellamy works his guitar to create unnatural sounds.

There is a gloriously tender moment as the band all come together on the stage extension to perform an acoustic gospel version of ‘Dig Down’. The audience raise their phones and the whole area becomes the depths of space with the huge number of individual lights.

The encore starts with the main album version of ‘Algorithm’ being performed, followed by a spectacular 15 minute blast through some of their heavier tracks in a stunning mash up. We are treated to ‘Stockholm Syndrome’, ‘Assassin’, ‘Reapers’, ‘The Handler’ and a final ‘New Born’ which showcase what a massive rock band they are. The final track of the night of course is ‘Knights of Cydonia’. Naturally with a Muse gig, this sees the front rows of the audience go mental. They are bouncing along and mini circle pits form as the song takes control. In a haze of feedback, bright lights and a vocal audience, the band take their bows and disappear from view.

Muse are a spectacle in the live arena and fully deserve their awards for ‘Best Live Band’ whenever they are awarded. With no future live dates announced, it will be good for the band to rest and revitalise. I am sure demand for a live return will be high as they keep pushing to be the best. The aesthetics this time around were not as dramatic as the Drones Tour, but based purely on the music alone, Muse are in a league of their own.