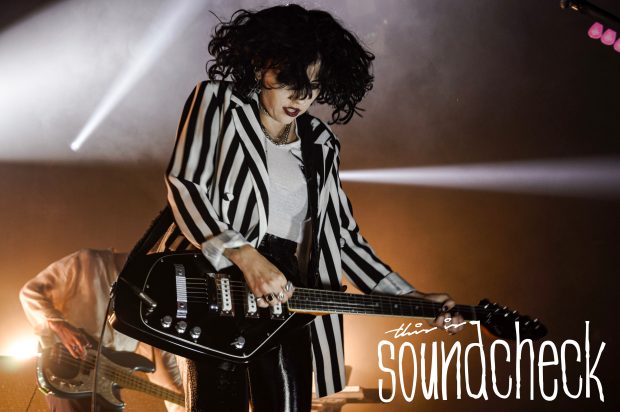 It has been just over 12 months since Pale Waves‘ debut album ‘My Mind Makes Noises’ was released, and the Mancunian quartet last played a headline show in Birmingham. Since then, the band have exploded. UK and American support slots to label mates The 1975 and multiple festival appearances have put the band in good stead, now was the time to see how much they had improved.

Opening the show tonight were one of the hottest up and coming bands in the UK; Sports Team. Frontman Alex Rice is a mix of 1990’s Brett Anderson with the cheekiness of Damon Albarn. Tracks like ‘M5’, ‘Kutcher’, ‘Margate’ and cracking new single ‘Fishing’ show the depth that they have. With a 90’s resurgence upon us, Sports Team should make massive waves in leading the new pack of guitar driven bands through.

With the capacity crowd in a jubilant mood, Pale Waves arrive on stage promptly and launch straight in to ‘Eighteen’ which delights the youthful audience who are captivated with Heather Baron Gracie’s every move.

With the exception of ‘Loveless Girl’, tonight we are given every track from their debut album and given a glimpse of the future with a brand new track, ‘Tomorrow’. Following a similar melody to previous hits, the new track is very well received and hopefully a new album could be on the way in the new year.

‘Kiss’, ‘Red’, ‘Television Romance’, ‘Black’ and ‘One More Time’ are exceptional. Heather aside, the rest of the band perform phenomenally. Ciara Doran (Drums), Hugo Silvani (Guitar) & Charlie Wood (Bass) have become an incredibly tight group. Clearly the support slots, festival appearances and endless gigging across the globe have allowed them to develop and grow as a unit. Combined with Heather’s vocals and captivating front woman abilities, Pale Waves have progressed massively.

By the time that ‘One More Time’ begins, the audience are a mesh of excited bodies eating from the bands’ palms. It is also a touching gesture to see the band close the main section with an acoustic rendition of ‘Karl (I Wonder What It’s Like To Die)’.

Returning to the stage swiftly to a mass noise of hysteria, they launch straight in to ‘Noises’. With audience and band in unison, they pull out a final rendition of ‘There’s a Honey’ which delights the sold out Academy. Thanking us for coming and telling us we will see them soon, Pale Waves deserve all the credit they are receiving.