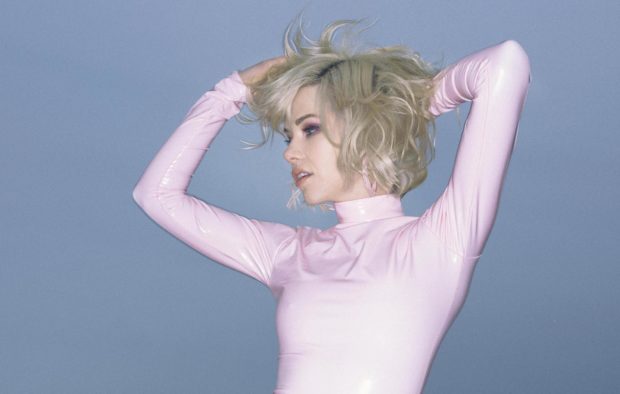 Opening her first of two UK dates in support of fourth album ‘Dedicated’, Canadian pop star Carly Rae Jepsen is in Manchester to entertain the jam packed room. The show, originally slated for the intimate surroundings of the City’s Albert Hall, had been upgraded to the larger capacity o2 Victoria Warehouse due to selling out in record time.

Tonight, Carly and her band offer a lesson in fresh pop and simple, yet spectacular visuals. She begins with a bang. Full stage lights glaring, thunderous drums as she launches in to the synth heavy ‘Run Away With Me’. This segues in to ‘E.MO.TION’ which starts to get the room bouncing as it sweeps along with a disco undertone.

She performs effortlessly and sincerely which is a quality you don’t tend to get in modern pop shows. With the majority of others having everything choreographed to the minutest detail, Jepsen seems to be natural and fluid. She intersperses tracks tonight with chatter, making the front rows feel as much a part of the show than those at the back. In turn, this makes the show feel warm, and the venue seem so intimate.

Her biggest UK hit to date ‘Call Me Maybe’ arrives early in the set and sees the audience engage in a huge singalong with the band. Always a risky move to play your biggest hit within the first thirty minutes of a show, but Carly’s confidence in her own music is fantastic. The rest of the set is peppered with slices of perfect pop and disco funk, you instantly forget about “the big one”.

There are a few hiccups throughout. The vocals become lost in the mix a few times, most notably during ‘No Drug Like Me’. Having a full band backing her however, allows this to carry on regardless. Her new material if anything, is reminiscent of the best bits of Girls Aloud mixed with fresh new Nordic popstar Dagny.

We get a live debut tonight during her epic 24-song set, a beautiful rendition of ‘Let’s Be Friends’ which is greeted like an old classic from her firm fanbase. ‘Everything He Needs’, ‘Cry’, ‘Too Much’ and ‘All That’ show off the various ranges of her voice and the main set finale of ‘Party For One’ leave the room in pure elation waiting for more.

We get a three song encore tonight of ‘Real Love’, ‘Let’s Get Lost’ and the set closer ‘Cut To The Feeling’. An explosion of all styles of pop supremacy that raged throughout tonight’s show. Jepsen may only be doing two dates on this all but brief UK Tour, but she has shown that even on album four, there is still so much for her to give. If her future outputs are as good as her first albums, and the live show is kept as fluid and natural as tonight, Carly Rae Jepsen will keep on growing in stature and should endeavour to become a great modern day pop star.