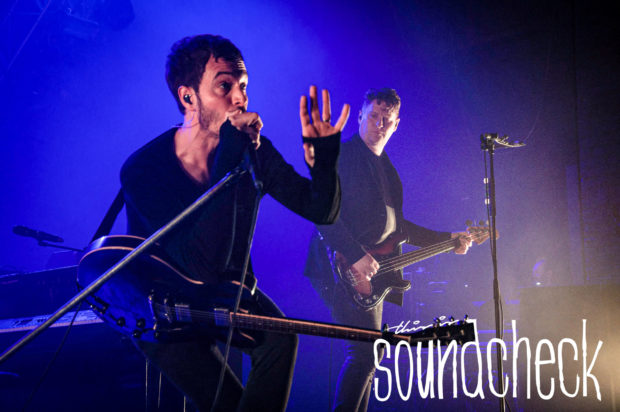 Indie legends Editors brought their ‘Black Gold’ Greatest Hits Tour to the intimate surroundings of Manchester’s o2 Apollo Theatre on a wet and windy Sunday evening. The packed out venue provided the gig goers with shelter from the oncoming Storm Dennis.

Launching the evening, ‘An End Has A Start’ propels the room in to a frenzy and the pace doesn’t stop there. ‘Bullets’ and ‘Bones’ complete the opening trilogy. Watching the band, you are transported back to the mid 2000’s when the band were predominantly an indie rock outfit. The Joy Division comparisons come more to the fore as they treat us to an ecstatic and synth heavy rendition of ‘Magazine’.

Promoting the recent ‘Best Of’, we get two of the three new tracks assigned to it. ‘Upside Down’ is a hypnotic piano led rocker, but it’s the fantastic ‘Frankenstein’ that surprises live. As the band rock out and Tom is prowling the stage throwing his hypnotising shapes, the tune transforms almost in to a full on rave. The whole of the Apollo is on it’s feet and moving in rhythm as the lasers and impressive light show shines all over.

The set, up to ‘Spiders’ and including a stripped back, solo acoustic version of ‘The Weight of The World’, is almost two entirely different halves. as soon as the band launch in to the celebratory sounding ‘A Ton of Love’, Tom and Co. are flying and do not come down. The last half is full of the early singles and it is like watching a band reborn. They breathe new life in to tracks ‘Formaldehyde’, ‘Blood’ and ‘All Sparks’.

During the electronic ‘Eat Raw Meat = Blood Drool’, the bass can be felt in the pit of your stomach around the room. ‘Fingers In The Factories’ gets a rare live outing and sounds incredible. They end the main set with a dreamy version of ‘You Are Fading’ which sees Tom Smith leave the stage to let his band mates bow out together.

The encore begins with ‘The Racing Rats’ and finds the whole of the Apollo joining in as the track reaches it’s crescendo. ‘Munich’ explodes and the room bounces along joyously. The final track of the night is the moody ‘Smokers Outside The Hospital Doors’. Tom thanks us for coming out and promises to see us again soon and for supporting the band throughout the last 15 years.

Editors are easily one of Britain’s best live bands, constantly evolving and producing music of supreme quality. They may not get the recognition they deserve, but with a string of sold out tours across the UK and Europe, endless high charting albums and high profile festival appearances, those in the know still get to appreciate the band in a wholly intimate arena. Here’s to at least another 15 years of Editors.