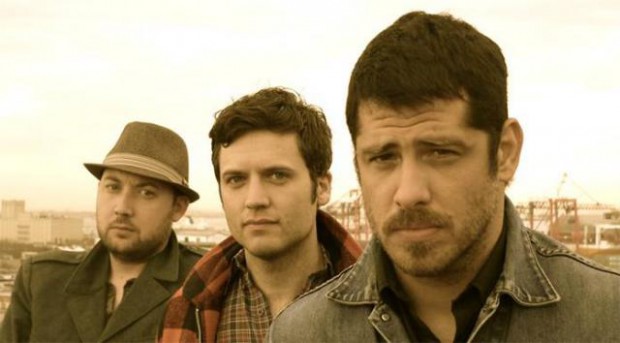 Following the release of their self-titled sophomore album, Augustines, and with fifteen weeks living on a tour bus behind them, Brooklyn based rock trio, AUGUSTINES, pulled into Birmingham’s Institute Library for the final show of their European ‘Walkabout’ tour. With their anthemic stadium rock choruses and emotional lyrics; forged from Billy McCarthy’s (Vocals / Guitar) personal life experiences, are followed by mixed reviews for both their albums and live performances – often being compared to the likes of Arcade Fire.

Opening up as support was Empire Divide, an up and coming alternative indie-rock band. The London based five piece played a tight set of emotive rock songs, rounding off an impressive outing with the heavily drum based ‘Cold Winter’; it is clear to see that they draw their influences from likes of Muse though, which isn’t a bad thing.

Augustines paraded on to the Institute’s stage to the sound of ‘Highway 1’, amid thunderous applause and an eruption of screams, cheers and whistles. It was clear to see from their beaming grins, as they soaked up the adoration that they were at home on any stage – be it Brooklyn or Birmingham. Rob Allen (Drums) thrashed his way straight into the night’s opener ‘Headlong into the Abyss’, Billy’s tonsil-ripping vocals urged the 600 strong backing singers to ‘Follow Me Down, Follow Me Down’ – and for the next two hours they did.

‘Chapel Song’, from the band’s debut album Rise Ye Sunken Ships, with its thumping bass and electro-pop synth was followed by ‘Cruel City’, again more of the Augustines bass, this time echoing and yet complimenting the harmonious chanting chorus lines and trombone outro, McCarthy insisting mid-song that the Birmingham fans showed him their hands, to which each and everyone did. Between these two songs Billy engaged the crowd, “Birmingham how are you doing?  This is it, the end of the walkabout tour…we’ve got a long night ahead… grab a drink…we’re having a celebration.”

‘Augustine’ and the guitar infused ‘Juarez’ were next out, the latter with its poignant lyrics of the past turmoil in McCarthy’s life, ‘I got a drunk for a mother – Got a saint for a brother’ had the Institute’s army of fans bouncing on the soles of their feet as they provided chaotic backing vocals.

McCarthy announced. “So let’s talk. How you doing? Last night of the tour, our third consecutive tour back to back…I aren’t gonna lie, my body is broken, my vocals are fucked up. We’re living kinda ropey, eating out of services, hanging out – making rock n roll for you people, and it’s taken a long time to get here – but I guess it takes a little patience. This next song is called ‘Ballad of a Patient Man’.”

‘Philadelphia – The City of Brotherly Love’ was next up, Eric Sanderson’s (Keys, Bass, Guitar & Backing Vocals) piano-led, melodic tune with heart-on-sleeve chorus was delivered by McCarthy from the crowd barrier. Billy engaged with as many fans as his out-stretched hand could reach, whilst he presented a perfect photo opportunity for the smartphone generation.

It was evident from the puddles of sweat the four guys on stage were standing in that they were giving it their all for the fans, many who had seen several shows on the Walkabout tour. Billy’s trademark hat was on and off more times than a lady of the night’s knickers as he and Eric worked the stage, and fans to perfection. It’s not often that a guy playing trombone can stir up a frenzied crowd further, but that’s what Al Hardiman (trombone, percussion, cello and anything else he could lay his hands on) did – and will hopefully continue to do for a long time. Augustines, listen carefully – don’t let this guy go.

Unlike some bands that don’t, it would be fair to say that the Augustines raised the crowd with every offering of the night even though some fans were unfamiliar with the older material; although the set was a well balanced mix between old and new. ‘Walkabout’, with its many layers each building up to a crescendo of musical power was one of the many highlights of the set along with an awesome unamplified version ‘The Avenue’.

The energy level of both band and fans alike is unquestionable: there’s no holding back at an Augustines gig, mainly because Billy holds the audience in his palm as he climbs the amps and steelwork of the stage area…but also because these guys are good at what they do. The fans didn’t disappoint, paying the band back with more and more enthusiasm as the night went on.

Augustines performed two encores – one on stage. The second made the show a more intimate event, something hard to do given the size of venue. From the centre of the Institute’s Library room Billy and the boys presented a very strong four song acoustic encore which to sum up in one word was – incredible…

‘Weary Eyes’, ‘East Los Angeles’, ‘Pressure Drop’ (a Toots and Maytals song from 1972) and a very apt ‘New Drink for an Old Drunk’ rounded off an impressive two hour set. The intimacy of the Birmingham’s Institute is an ideal venue for both band and fans alike. All in all it was an excellent set – well crafted and professionally delivered by a band which after fifteen weeks on the road performed with first night enthusiasm.