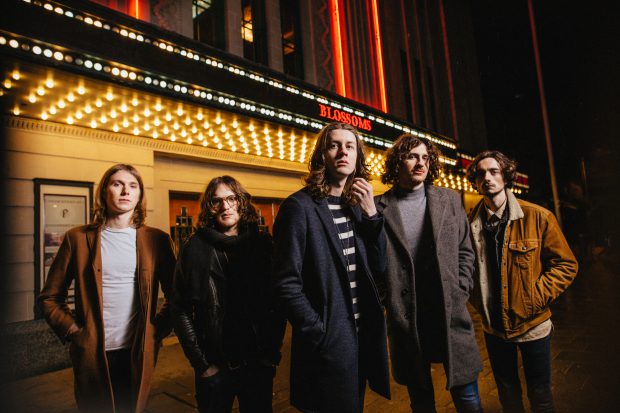 After a high-octane year having released their debut album, garnering high critical acclaim, playing sold out tours and festival appearances galore, Blossoms last night brought back their rocking sound to the intimate and sold out venue of Birmingham’s o2 Academy.

Kicking things off early is first support act, Rory Wynne. The 17 year old lad from the North is no stranger to the oncoming fame. He has recently supported Blossoms on previous dates, supported The Coral and even had a moment on TV in the ITV Series ‘Cold Feet’. Tonight he performs an effortlessly professional and tight set with tracks from his debut EP ‘What Would Rory Do?’. Highlights including “Why Don’t Ya?’ and a scrawling ‘Heart of Stone’.

Next up were the fast rising new comers and kings of neo-political rousing fun time tracks, Cabbage. These fellow Mancunians fearlessly entertained the screaming crowd with tracks from ‘Young, Dumb and Full of…’. The young crowd rocking in unison with the young heroes as tracks like ‘Dissonance’, “Terrorist Synthesiser’, ‘It’s Grim Up North Korea’ and new single “Gibraltar Ape’ shake the foundations of the Academy.

After raising the temperature my multiple degrees, the time is eventually set for the lights to dim and Kayne West’s ‘Black Skinhead’ to pump out of the PA as Blossoms arrive onstage to cheers. Kicking off with ‘At Most A Kiss’ and ‘Texia’, the room is sweaty, the people are enjoying themselves and the heat is turning up.

The band, led by frontman Tom Ogden, put on a flawless show and treated the masses to all of the highlights from their number 1 debut record. Of the many highlights tonight, ‘Blow’, ‘Getaway’, ‘Honey Sweet’ and ‘Fourteen’ standout. ‘Blown Rose’ gives way for ‘My Favourite Room’ in which the band segue a delightful mix of Babybird’s ‘You’re Gorgeous’, Oasis’ ‘Half The World Away’ and Wham’s ‘Last Christmas’ in tribute to the late George Michael.

A very tongue in cheek moment arrives when Ogden asks the audience has been dumped recently before dedicating a song to a young audience member called Lewis’ ex-girlfriend. The band finish their set on a sprightly ‘Polka Dot Bones’ and leave with the entire crowd in the palm of their hand.

Needless to say the band return quite quickly to the stage for an encore starting with ‘Deep Grass’. After thanking us for our attendance and promising the usual that they will return again soon, the biggest cheer of the night kicks in as they launch in to their biggest single to date, the gorgeously jangly “Charlemagne’.

Blossoms may have only released one album, but they are a band to take note of as they will be back and bigger than ever before. They are the kind of band who will take the same path of The 1975 whereas on their second album, they could be selling out arenas across the globe. Here’s hoping.