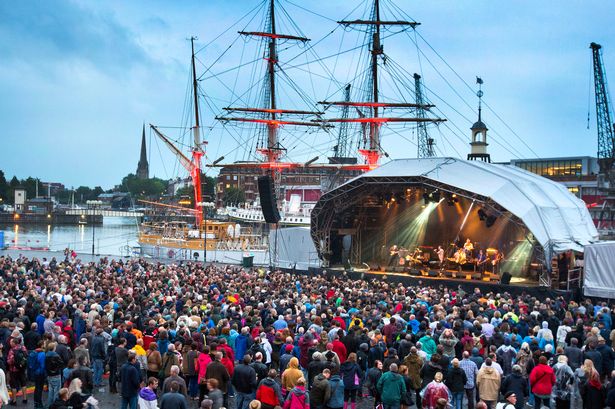 Bonobo, Manic Street Preachers, Craig David and Haçienda Classical have all been revealed as the 2017 headliners for a series of gigs set at Bristol’s harbourside next month. Bristol Sounds is a four night midsummer gig series based at the Lloyds Ampitheatre at Bristol’s Harbourside.

Taking place from Wednesday 21st to Saturday 24th June in the Amphitheatre, tickets are now available online and to personal callers at the Bristol Ticket Shop.

Kicking off the four day event on Wednesday 21st June is the Brighton-born and LA-based DJ and producer Bonobo, whose sixth album ‘Migration’ has just been released. Having already sold out London’s 10,000 capacity Alexandra Palace in just minutes, this show is a real coup for Bristol.

On Thursday it will be the turn of Welsh rock giants, Manic Street Preachers. Whilst starting work on their 13th studio album, the trio have recently released a 10 year collector’s edition of their eighth studio album ‘Send Away the Tigers’, this follows the bands’ sell-out arena tour last year. Manic Street Preachers will be supported by indie rock band British Sea Power and Welsh multi-instrumentalist The Anchoress.

Craig David will then be heard across the Amphitheatre to get the city’s weekend started on Friday 23rd June. The UK garage pioneer, whose last album ‘Following My Intuition’ topped the UK album charts, has been selling out venues across the country and comes to Bristol as part of a huge nationwide tour.

The final night in the gig series will see Haçienda Classical take to the stage on midsummer’s eve, Saturday 24th June. The brainchild of former Haçienda club DJ’s Graeme Park and Mike Pickering, the reimagining of club anthems with Manchester Camerata Orchestra has earned them huge critical acclaim. Guest collaborator will be former Joy Division/New Order bassist and Haçienda co-owner Peter Hook, along with some very special guests.

The four concerts are expected to see over 20,000 fans enjoy live sets in the spectacular setting of Bristol’s Harbourside. The full line-up of support artists will be announced in the coming weeks. 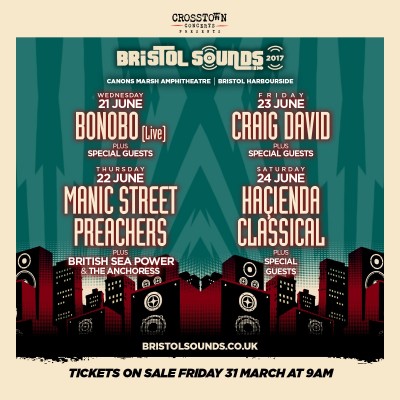 Bristol Sounds is the brainchild of Conal Dodds, co-founder of Crosstown Concerts who originally started Bristol Summer Series and co-organised the iconic Massive Attack at The Downs last summer.


““Live music is an integral part of Bristol’s culture and with Bristol Sounds we’ve selected a top notch mix of acts over four nights to appeal to different audiences. The amphitheatre is an incredible setting for live music and we are really excited to bring these four shows to the heart of Bristol”

To keep up to date with the latest information and news on the gig series please visit www.bristolsounds.co.uk or www.facebook.com/bristolsoundsofficial or follow @Bristol_Sounds on Twitter and @bristolsounds on Instagram. The hashtag for this year’s event will be #BristolSounds17