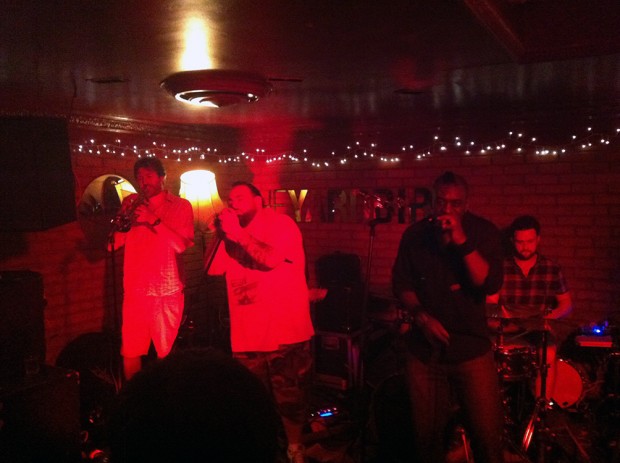 Birmingham based soul/funksters CANTALOOP played a rather intimate gig at The Yardbird in the city centre last night to launch their latest single ‘Avalanching’.

Upon arrival at the venue, the party was already in full swing with slick old skool soul classics being pumped out from a DJ and people busting their skanking moves out on the intimate dancefloor, occasionally spilling out in to the forecourt. Around 11pm, the band took to the stage and did not disappoint in the slightest.

If the room wasn’t already hot and sweaty on this glorious summer’s evening, it certainly started to roast. Frontman Dee had the crowd in the palm of his hand as they burst through an energetic set. First ‘special guest’ of the evening was ‘Uncle’ Frank Benbini aka: drummer from the Fun Lovin’ Criminals, Solo artist in his own right, and former member of Cantaloop. For most of the set, Frank joined in on guest vocals.

Second guest of the evening was the wonderfully talented young singer-songwriter Sam Rogers. She took over lead vocals for the new single ‘Avalanching’ which saw the room bounce and groove along in full swing as the rhythm took hold. Sam remained on stage for the rest of the set adding her vocals in to the mix.

With Dee enticing the crowd in to a party zone, he then introduced ‘Captain Sabotage’ on trumpet who then morphed in to ‘Sugar Lips’ as he took over a wonderful harmonica solo. At almost midnight, the party was not stopping just yet. The next track saw the room divide as Dee and Sam led one half through a call out response and Frank led the other half in to a West Side Story inspired funk off. The track ended with the whole room coming together in a wonderful euphoric soul party.

The final track of the night seduced the whole room on to the dancefloor as the groove buit and built. The brass section and drum/bass carried the momentum as Dee’s vocals backed by some smooth guitar interwined with every person in the room. As the tension was building, people from the back made their way to the front and in unison, the room took off as the song transcended and finished on a grooved high.

An absolutely wonderful evening of soul from some very talented local musicians. Check out the new single and check these guys live on one of their many dates over the summer. If you’re in the mood for something a bit different, summery and soulful, then these guys are the soul of the party.