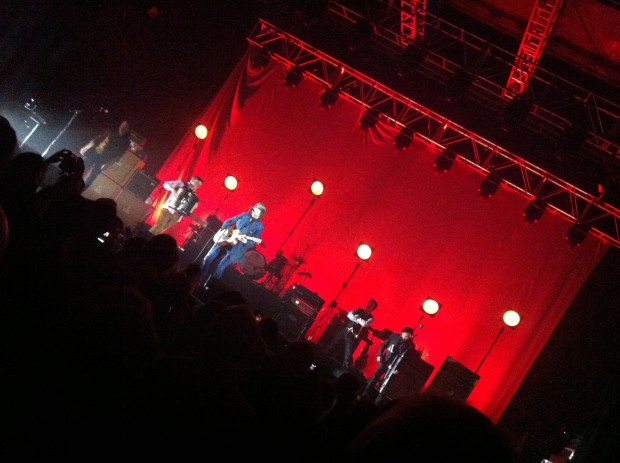 Scottish rockers, DEL AMITRI (the Dels as they’re more affectionately called by their ardent fans) have made a welcome return to touring after a decade long hiatus. Their thirteen city, A to Z of Us, tour pulled into a rain soaked Wolverhampton last night for its penultimate show at the Civic Hall.

Fans of all ages made up the near capacity crowd, some of whom professed to have followed The Dels from their Glaswegian roots way back in the early eighties; many had travelled from all over the country, (some to every show of the tour) relishing the reunion of their musical heroes.

The very apt house music – Thin Lizzy’s ‘Boys Are Back In Town’  – faded, lights dimmed and the patiently awaiting audience roared into a frenzy of exaltation and joy as Messrs Currie and Harvie along with Andy Alston (keys/accordion), Kris Dollimore (guitar) and Ashley Soan (drums) made their way to the stage.

Kicking the show off with their 1992 Top 20 hit, ‘Always The Last To Know’, Justin had the crowd singing along as soon as the first chord was struck, maintaining the momentum of both band and fans by segueing straight into ‘Kiss This Thing Goodbye’ – a thundering start, and a sign of things to come.

All the hits were rolled out along with many other crowd favourites in a twenty-three song set list including ‘Hammering Heart’ a track from the debut self titled 1985 Del Amitri album. Highlights were by far ‘Spit in the Rain’ followed by ‘Stone Cold Sober’. The Dels played these with so much passion and energy  – they were up there giving it their all; even the balcony was up, dancing and singing along.

‘Nothing Ever Happens’, as expected, had every man, woman (and child) singing their heads off in the Civic and was greeted with great applause – Currie and Alston milked the ending, and so they should – it was perfect.

‘Food For Songs’ had Ashley Soan sitting atop of his bass drum driving the beat, driving the tempo and maintaining The Dels exceptional performance. ‘Drunk in a Band’ had an almost Ramones feel to it and was a perfect song to round off the main set.

After a very brief interlude came the four song encore, a slow bluesy start, almost B.B.King going into Clapton with ‘In the Meantime’.  ‘Here and Now’ along with ‘Just Before You Leave’ the latter played on Currie’s Gibson E355 lifted the audience before The Dels rounded off a perfect evening with ‘Move Away Jimmy Blue’.

There were no fancy lights, no pyrotechnics or dry-ice gimmickry on display – the set list flowed to perfection, was well constructed and, as it said on the tin, offered a complete A to Z of Del Amitri. Currie fluffed the start of one song to his band mates amusement but that was the only mistake of the night, in criticism there wasn’t much audience banter/rapport, but you pay for what they play – not what they say.