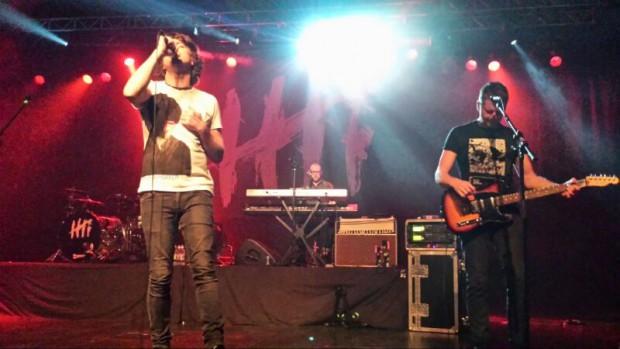 Following an eight year hiatus and the release of their self titled; sixth studio, album Yorkshire rockers, EMBRACE, are back with the band’s second show of their ten date UK tour in Birmingham’s O2 Academy. Embrace are more indie-rock than Britpop and hailing from a decade which threw up giants such as Oasis and Coldplay, have in the past been there and got the tee-shirt (a fledgling Coldplay once opened up as support for Embrace back in the day). Following extensive gigging and a couple of EP releases they released their debut album The Good Will Out which hit the top spot in the UK album charts; in turn the band were awarded with NME’s 1998 award for Best New Band.

Surprisingly there were two opening acts as support. First up was NGOD, an up and coming band from Bradford, driven by an awesome drum and bass powerhouse. Keeping the Yorkshire spirit alive, I Like Trains an alternative/rock band from Leeds performed a very strong set. David Martin’s, somewhat haunting, baritone vocals shone…although every offering seemed to end with a similar wall of sound. Both openers were well received by an appreciative Birmingham audience.

Embrace paraded on to the O2’s stage amid rapturous applause and an eruption of hollering whoops and whistles. Before they kicked the night off Danny McNamara (vocals) asked of the crowd. “How you doing – you alright?” Then they opened up with the first three tracks from Embrace ‘Protection’, ‘In the End’ and ‘Refugees’. All well received by the fans and well played. Although they initially lacked the tightness of their earlier years, this was soon remedied with the more mellow ‘Nature’s Law’ a 2006 top ten single from their fifth album This New Day, which had an amazing response from the audience.

Refreshingly, Danny engaged well with the fans throughout the night, asking if they’d ran out and bought the new album or just “sneakily listened to it on Spotify?” He then proceeded to tell the crowd about their last Birmingham gig; highlighting the damage Mickey Dale (Keyboards) caused to his foot when he took his frustration out on a venue’s wall.

With prompt lyrics clearly displayed on his hand Danny and the band continued with ‘My Weakness is None of Your Business’, one of Embrace’s early releases. This was followed by ‘Someday’ and ‘Gravity’ a song penned and gifted to the band by Coldplay’s Chris Martin. Throwing red glow-sticks into the crowd, Danny asked everyone to raise smart-phones and lights high for ‘Follow You Home’, another offering from the latest album; a good touch came as the band paused allowing the chanting fans to enjoy the moment. ‘Come Back to What You Know’, another song which Danny professed not to remember the lyrics had the crowd raising the roof as they sang along.

As with most bands, it’s the big hits that really get fans going crazy and ‘Ashes’ rocked the O2. There were several occasions where Danny, much to the frustration of security, raised the balcony off their asses. He conducted the audience as he gave them ample opportunity to sing-a-long and join in their return. His interaction with the crowd – thumbs up here and there, waves and acknowledgement – is something that a lot of bands fail to do these days.

It wouldn’t be just to say that Embrace raised the crowd with every offering of the night as the fans were unfamiliar with the new material; although the set was a well balanced mix between old and new. The energy level of both band and fans alike is unquestionable: there’s no holding back, mainly because Danny holds the audience in his palm…but also because these guys are good at what they do. The fans didn’t disappoint, paying the band back with more and more enthusiasm as the night went on.
‘Quarters’, ‘One Big Family and ‘Bullets’ started a four song encore, during which Danny humbly praised his brother Richard (excellent on Guitar and vocals) for his work on the new album and getting the band back together. Embrace rounded the night off with ‘Good Will Out’ an ideal choice for the closing track.

The intimacy of the Birmingham’s O2 is an ideal venue for both band and fans alike. All in all it was an excellent set – well crafted and professionally delivered by a band that after an eight year vacation are definitely back. With the promise of not leaving so long until they returned, Embrace certainly Embraced the night.