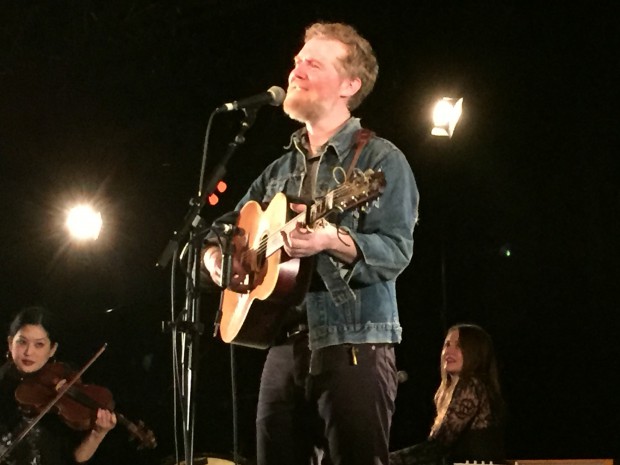 Irish troubadour Glen Hansard has had a busy 2015 to say the least. Recording a new album, reuniting with his band The Frames for some massive homecoming shows in Dublin, and then embarking across Europe before hitting the USA on a tour in support of his recently released second solo album ‘Didn’t He Ramble’.

Tonight sees Glen arrive in the intimate setting of the Koln Live Music Hall in Germany. At a roughly mid-way point of his ramble across the continent, Glen arrives on stage to a rapturous applause from the sold-out venue.

The great thing about Glen’s performances are to simply stand back, take in the music and watch one of the most under-rated performers of our generation get lost in the soul of the lyrics. Tonight there are numerous highlights. Renditions of: ‘Winning Streak’, ‘When Your Mind’s Made Up’ and ‘Paying My Way’ to name a few.

The opening couplet of ‘Just To Be The One’ and ‘My Little Ruin’ set a steady pace. Hansard’s storytelling both in verse and in between songs warm even the coldest of hearts. Hearing stories behind the songs is one thing that Glen is great at. Tonight we get the meaning behind ‘McCormack’s Wall’ about a drunken night in Dublin with a close friend. Proving again that he has not let fame take him away from his roots.

Being a multi-instrumentalist is a feat in it’s own right, tonight we see Glen playing both acoustic and electric guitars, a mandolin and piano. The tenderness of the mandolin and accompanying vocals on ‘Come Away To The Water’ silence the whole venue. The groove of ‘Talking With The Wolves’ slides effortlessly into a classic American rock n’ roll take on ‘Way Back in the Way Back When’.

Recent single ‘Lowly Deserter’ sees the mandolin return to the fore, but the whole venue gets caught up in it’s jazzy stomp. ‘Her Mercy’ sees Glen invite the whole audience to transform in to a choir for an extended and passionate rendition. The love in the air and velocity that the voices sing back to Glen and his band could certainly raise the roof and give a gospel choir a run for their money. Glen’s main set ends with a passionate version of ‘This Gift’ from the film ‘The Odd Life of Timothy Green’.

Returning to the stage for an encore, Glen arrives alone armed with an acoustic guitar. He begins by performing a cover of ‘Astral Weeks’ by Van Morrison, someone who Hansard has been compared to many times. We next get a solo unplugged rendition of The Frames’ classic ‘Revelate’, a personal joy to see live again and intimate. As members of the band trickle back to the stage, we get a wonderful rendition of Hansard’s Oscar winning track ‘Falling Slowly’ dedicated mid-way through to his co-star in the film ‘Once’ – Marketa Irglova.

Inviting the support band The Lost Brothers back to the stage, Glen swaps to the bass and takes a back seat as singer Mark McCausland takes lead on a cover of Bo Carter’s ‘Corrine, Corrina’. A special mention must be given to The Lost Brothers’ set to open the evening. A perfect set of acoustic wonderment and storytelling to warm the hearts on such a cold night.

Glen begins his final encore by going completely unplugged at the edge of the stage with no mic for a version of ‘Say It To Me Now’ before stopping to ask if people at the back can hear. After a moment, he jumps off the stage and proceeds to head towards the bar at the back of the venue. Standing on the surface, he performs a flawless version ruined only by minimal amount of talking from those struggling to hear. Following a cover of Interference’s ‘Gold’, Glen returns to his band on stage. The night ends with a cover of Brendan Behan’s ‘The Auld Triangle’, this sees all members of the band and a few of the crew step forward to make up and sing a verse.

After over two hours solid performance, most artists would be flailing. Tonight Glen Hansard gave us just under 2 hours 20 minutes of pure entertainment – and I believe he could have carried on even longer had there been no curfew. A show well worth a trip from the UK to see, should Glen Hansard ramble across these shores again, please make a note to go and see one of the best live shows you will see for a long time.