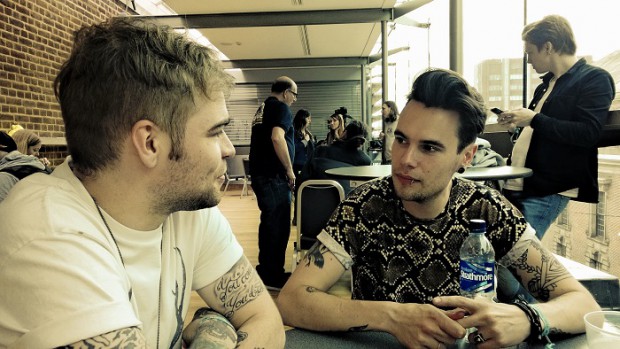 After kick starting the Main Stage line-up at SLAM DUNK FESTIVAL; Cheshire rockers BLITZ KIDS stopped by the press room to talk to us about their festival weekend, the recently released album The Good Youth and a hint of things to come. We chatted to bassist Nic Montgomery and guitarist Jono Yates about their set.

Soundcheck: Hows it going?
NM: Very, very well thank you. How are you?

SC: Really good thanks! You’ve just opened up the Main Stage and you had a really, really big crowd for you. How did you find it?
JY: Errrr, It was really fun. We were hanging a little bit; we partied pretty hard last night. Nic [Montgomery – bass] still hasn’t had a beer yet!
NM: Still on water, not showered, not really brushed my teeth or maybe washed my hands once…

SC: Is that the second day in a row?
NM: No, no!!
JY: I’ve never seen him like this…
NM: I’m a very clean man usually; I’ve just abandoned all hope…

SC: This is day three of Slam Dunk Festival; describe the other two days [in Hatfield and Leeds] and then describe this one [in Wolverhampton]?
JY: Leeds and Hatfied we’ve been playing four years.They seem to be the main Slam Dunk Festivals’. However, Wolverhampton has seemed to come about in recent years. We played it for the first time last year and it’s just everyone goes really mental in Hatfield and forget they have one more show to play.
NM: It’s the show after the night before… It’s so funny watching people you meet in Hatfield and getting trashed… Then you see them today and they just walk passed; head down.
JY: They’ve all seen Nic yesterday and thought “That guy is the most fun person on the planet.” If they see him today they’ll think “That is a shell of a man!”

SC: These shows are off the back of The Good Youth which was out in January; whats the reception been like for it and how have you found the last few months?
NM: Yeah, really good. When we released the album we did a couple of shows and they went down really well. Pretty much from January we’ve seen a big leap, haven’t we?
JY: Huge, like this time last year – If we’d have opened the Main Stage, there would’ve been no-one there at all. The fact that so many people were there just shows . It’s all been really organic; we’ve been going for eight years now; despite being nominated for Best British Newcomer for the second year running?! It seems a bit of a joke!! We’re just lapping it all up at the moment, enjoying it and having a laugh. The fact that people like us is such a good thing!

SC: Over the next few months you’ve got the festival season; have you planned a busy one?
NM: We’ve got a lot of independent ones and a lot of the smaller ones… We kind of missed out on festivals last year; we did Download but we’ve decided to have one pretty much every weekend this year, we jsut wanted to make sure we played as many as we can and see as many bands as we can.
JY: Some pretty sick ones too. We’re doing one with Gallows and The Bronx which is going to be unbelievable. Sonisphere too; 2000Trees as well…  We’re doing a bunch!

SC: Do you look at festival line-ups and say “I want to be part of that” or do you have a say in the festivals you do?
NM: We just got offers in and we accepted them all. We just wanted to do as many as we can. Its a bonus when there are good bands on but even if there are some dog-shit bands we’ll still play it. We’re just there to have a good time. It’s a free gig!

SC: Have you got plans to get back on the road later in the year?
JY: Yeah, we’ll announce it now! We’re doing a headline tour in October with a band called Verses… And another band which we can’t actually announce yet, but they are native to the UK! It’s a really strong UK line-up and we’re headlining it so it’s an absolute honour. They’re all friends of ours so it’s really good.
NM: Our London show will be at the Garage – so hopefully tickets will sell… If not at least we’d get a rider and free beer!