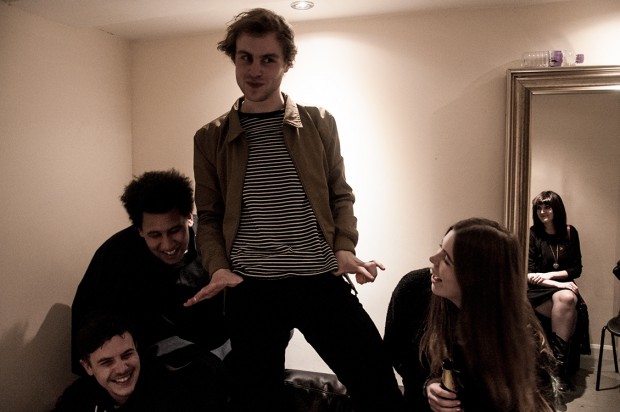 Superfood have already made quite a name for themselves in the clubs and venues of England’s second city, but the Birmingham four piece’s recent swing of momentum could see 2014 becoming their biggest year to date. Formed back in 2012, they’ve honed a live reputation that has seen them sharing the stage with the likes of Peace and Wolf Alice, as well as a recent stint on tour with Brooklyn indie-rockers We Are Scientists, all having released just one EP, THE MAM EP, on March 3rd.

Sitting in a small dressing room above Birmingham’s Institute, they don’t seem too daunted by how far they’ve come, and how quickly. In fact, when Soundcheck sits down to talk to them, they seem pretty excitable, thanks in part to the progress they’ve made on their upcoming debut LP. Guitarist and lead vocalist Dom Ganderton, at least, seems pretty happy with it. “They do a monitor mix before it gets sent off to get properly mixed. We got those through. I was listening to those today on the way up from London, and the sun was out, it sounded good.”

While the MAM EP has only been out for a few weeks, it’s already made fans eager to hear some of this new material. The band are certainly enjoying the opportunity to approach the album recording process a little differently. Lead guitarist Ryan Malcolm explains, “There’s a lot more thought gone into [the album]. It was a bit rushed, really, the Mam EP. We were told the day before we actually recorded it that we were going to record it. I’m really happy with it [the album]”. Says Dom, “They were really just the first four songs that we’d written, apart from ‘Superfood’. It’s [The new album] a lot better. It sounds better. Good-er-er. It’s the best album we’ve ever done”.

This cheeky sense of humour is obviously something that the whole band share. It must be pretty fun, then, to be on tour with We Are Scientists, universally known as one of the funniest live acts around? Bassist Emily Baker agrees: “They’re really funny. Between songs they do almost like a comedy show.” Adds Ryan, “They came off stage the other night and we were sat in our dressing room, and Keith [Murray] came into our dressing room and was like, ‘what are you doing in here? Come into the dressing room. Chill with us. Why are you being so weird?’ And as well, which is really cool, they’ve watched us every single night, and every time we get off he always goes, ‘you guys sucked. Sucked’”.

Of course, WAS aren’t just a comedy act. Dom explains, “They’re really great live as well. So tight. Yeah, it’s just been really good. We’ve been out for drinks with them and stuff. On the first night, normally with headline bands they’ll walk straight off stage and want to get into their dressing room as soon as possible. And then, like, I said “Good show man” and tapped him on the back, and got into a conversation with him and he was talking to me for like 20 minutes before he even went back to his dressing room, all sweaty and stuff. It was like, ‘that’s fucking cool’”.

We Are Scientists aren’t the only band that Superfood have won over. In fact, one of the first mentions of the band came from Peace lead singer Harrison Koisser, who has previously named them as a band crush of his. There’s obviously a lot of mutual respect between the crop of new artists emerging from Birmingham at the moment, but at the same time, the ‘B-Town’ label seems to be universally applied to any act coming through, regardless of style or genre. Is that something that bothers them? Not according to Dom: “I don’t think it’s a negative thing. It just helps every other band really. It hasn’t done anything bad. It might start doing something bad if a load of bad bands start coming out of Birmingham. Thing is, there haven’t been that many awful, awful bands coming out that have started going to London and playing shows and stuff. There’s still bands in Birmingham just playing Birmingham, but the bands that are wanting to do it as ‘their thing’ are all pretty good.”

One thing that many of the bands emerging in the Midlands seem to share, is a dominant 90s influence. Whether its Brit-pop, grunge, riot grrrl or the myriad other genres of the decade, that distinctive 90s sound is virtually inescapable. Superfood’s MAM EP certainly has a revivalist feel to it, but this, they say, is coincidence. Ryan puts it simply, “I think you just write songs the way that you naturally write songs.”

Dom, however, has a different explanation. “I think we kind of fucked it with the name. If we were called something cool with spaces between the letters, it’d have been better, but because we’re called Superfood and then there was obviously Supergrass, I think it was easy for people straightaway to make the connection. I think, fair enough, with that [MAM] EP, I can see where people are coming from, but I think with the album, if people are still saying it’s really 90s, then we’ll give up. ‘Yeah, we take loads of influence from the 90s’”.

So, would it be fair to say that the way that they’ve approached the writing and recording process of the album differently? “I think it’s more the way we’re approaching it with this part, with mixing it afterwards, and how we’re going to get things to sound,” Dom explains. “I think the writing process was the same, but just slightly better obviously; we’ve written better songs. I think it’s just the way that we want it to sound when it’s finished, I think that’s what’s changed the most. We want it to sound less like just a band in a room with spot mikes and everything. A bit more interesting.”

They aren’t giving too much away, but it’s fair to say that the album is already going to be high at the top of a lot of wish lists. Charmingly enthusiastic and precociously talented, Superfood have a pretty big year ahead of them, including an as-yet unconfirmed headline tour. “There’s been rumours of September. That sounds like a Jane Austen book” Dom laughs. Ryan agrees. “That could be the album name.”

You heard it here first.