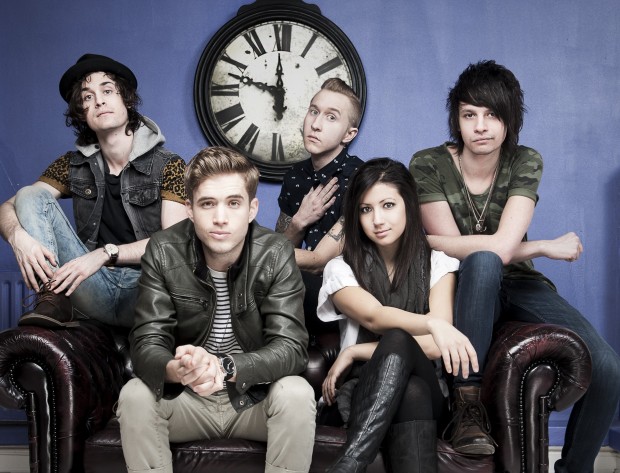 Scottsdale, Arizona’s The Summer Set popped up at just the right time with Legendary, their 2013 album celebrating life, love, and all the opportunities both bring. With their breakout hit ‘Boomerang’ they’ve made themselves something of a household name back home in the States, and it doesn’t feel like it will be too long before they experience the same success over here. We sat down with vocalist Brian Dales and drummer Jess Bowen before their set at Hit the Deck festival, and it’s fair to say that they’ve been having a pretty good time of late.

Since forming back in 2007, the band have released three albums, played across America, Europe and Asia, and even managed to sneak in the odd go at some extreme sports. Do they feel like things have picked up for them pretty quickly in the past year or so? Brian isn’t sure. “It’s been a very slow-and-steady, gradual thing. But I can definitely say the last year, from Legendary coming out, has probably seen the most growth. It was one of those things where, you climb at a very gradual rate, but then you hit a certain threshold, and then once you pass that, everything starts to move quickly. Last year was the most exciting year we’ve ever had. We got the chance to do some things so far out of our comfort zone, which you should always try to do as a band. To help you grow.”

Last year included spending Thanksgiving playing the Macy’s Day Parade in New York, releasing their most successful album to date, and, thanks to the Backstreet Boys, a chance for Jess to confront one of her biggest fears. And for Brian to push her out of a plane. Jess explains, “Basically, I had agreed to going skydiving as a legendary moment. It’s my fear – I’m terrified of heights. We played the show with the Backstreet Boys, and I was kind of backing out of the skydiving because I started getting really, really nervous, so I told Brian that if he could get me a picture with the Backstreet Boys alone, I would go skydiving as many times as he wanted the next day. So sure enough, I got my picture.” For Brian, there was only one thing at stake. “I passed on the word to every rep we had with us at Macy’s. Mostly because I really wanted to go skydiving. I wasn’t going to get to go if you didn’t do it!”

Of course, there were some musical highlights as well. For one thing, the band won the Rising Stars competition for Las Vegas’s I Heart Radio, and got to play a slot at their annual festival in the bargain. “I don’t think you can ever even dream of playing a show opening for Queen, Elton John, and Katie Perry. And Muse! That was definitely a milestone. That was really awesome.” They also decided to complete an acoustic tour across America, an experience the band can’t wait to repeat. “We were on the verge of doing another tour that would be more the same, the same mid-sized clubs, with three or four opening bands,” Brian acknowledges. “I think we pulled the plug, realizing that we needed to do something differently, something new. So we did an acoustic tour playing Legendary front to back and having no opening bands, it was just us. And it went phenomenally. So I loved it, and I already want to do something like that again.” Jess agrees. “I think it was pretty refreshing for the fans as well. We’ve toured so much in the last six years and it’s always the same type of thing, so it was really cool to give them something new and I think they all really enjoyed it, so I can see us hopefully doing something like that again soon.”

Having been together for seven years now, the band have more than a few tours under their belt, and have played with their fair share of pop-punk’s finest. Are there any bands that they’ve particularly loved getting to tour with? “I’ve always really loved touring with All Time Low, just because of the way they treat the bands that are opening for them. The way that they run their ship is something that I’ve always admired, as far as a professional touring crew” Brian states. It’s a sentiment Jess readily agrees with. “Yeah, they’re very nice. They gave us a bottle of champagne at the beginning of the tour and the end of the tour, and they’re just the nicest people. They’re great musicians. I love them as a band too.”

When it comes to other artists, it seems important to mention their Loves Like Swift deluxe edition of sophomore album Love Like This. How did that recording come about? Jess explains, “what happened was, we played a festival in the US, and each band picked an artist that they liked, and played a few of their songs, so we decided to do Taylor Swift. We’re huge Taylor Swift fans. But our label at the time, Razor & Tie, had recorded it, and they loved it so much they wanted to release a deluxe version of our album Love Like This, and add those tracks to it, and call it Love Like Swift. We didn’t release an album where we thought ‘let’s cover Taylor Swift’. It was that we played a festival, and that the label really liked how those songs turned out.”

It sounds far less deliberate than the final recordings suggested. So are they not generally fans of recording covers? Brian is hesitant to agree. “We like covering songs live. Jess does some cool drum covers on Youtube. And I think that’s a cool line. But I think we learned in the past, even from other covers we had done, that recording a cover of a song in a certain way, and then playing it for a while can get you attached to a cover. I don’t know if being known for a cover song is always something that you really want. We love covering songs live.”

Their biggest buzz, of course, comes from playing their own material. “I’m really enjoying playing ‘Lightning In a Bottle’ right now” says Brian. “We just put out a music video for it, and think there’s a lot of momentum about the song, with it being our current single. But also, right from the get-go, our fans really gravitated towards it, and I love playing it live.” Jess, meanwhile, has a different favourite. “I’m really enjoying playing ‘Rescue’. It’s actually what we’re opening with on this tour. It’s really fun, it’s a good one to open with and the kids seem to really like the song.”

Performing night after night, for any band, must be difficult, and The Summer Set have certainly put in the overtime over the past few years. As well as All Time Low, they’ve played with Yellow Card, We Are In The Crowd, Mayday Parade and of course their current UK tour with William Beckett. Do they find it hard to maintain their energy playing so many shows? Brian admits, “We play five or six shows a week, and sometimes by day 5 you’re tired, you don’t feel that good. I remember watching this Bruce Springsteen documentary and he touched on that topic. Someone asked him, “How do you play for three hours every night, five nights a week. By day five, how do you even want to go up there and do it anymore?”

“He said, and this has always resonated with me, ‘The fans that are coming to your shows, this is their one night, to get away from work, to get away from whatever stress they have at home and just enjoy themselves. You have to always keep that in your mind. Every night has to be the first night all the time’. That’s something that, while albeit it’s very hard, is something I always try to remember when we’re playing shows.”

It’s an admirable attitude to have, and it makes it easy to understand why their legions of fans are so devoted. What do they hope that those fans will take away from a Summer Set show? Brian thinks for a moment. “I want them to leave our shows full of energy, full of life, and inspired to remember to believe in themselves. I know a lot of our fans struggle with a sense of confidence sometimes. I know we do. Everybody does – we’re human. I think, especially since Legendary came out, and touring off this album for the last year, there’s been a sense of playing these shows, and wanting the energy in the room to have left people inspired to do whatever they want to be doing.”

For Jess, the answer is a simple one. “I hope they leave happy. With a smile on their face.”

Legendary is out now via Fearless Records.