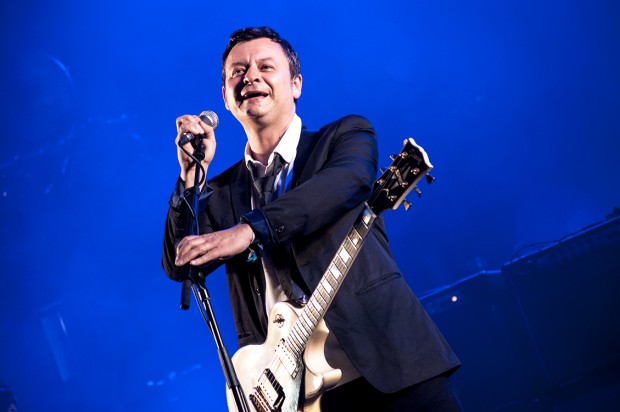 Almost 21 years ago on 29th December 1995, Manic Street Preachers stepped on to the stage at Wembley Arena supporting the Stone Roses and debuted the first tastes of their new material since guitarist and lyricist Richey Edwards went missing. No one could foresee at that point what a behemoth those new songs would become. Trace forward to May Bank Holiday weekend 2016, and 20,000 people are here in unison to celebrate the heritage of this landmark album.

Having completed a run of dates across Europe and the UK over the previous few weeks, celebrating the 20th Anniversary of ‘Everything Must Go’ has seemed like a party following on from the rock art neuveau of 2014’s ‘The Holy Bible’ tour.

Opening for the event today as the stadium fills at a constant speed is Public Service Broadcasting. Their elementary blend of psych-pop rattles around the arena giving them the exposure they so rightly deserve.

The second support act is a local act who bizarrely in the 25 year career are playing Swansea for the first time ever, Super Furry Animals. Kicking off proceedings with ‘Slow Life’, the ‘furries’ give a great example of why they have become so revered in the industry. Pillaging from their extensive back catalogue, the Welsh crowd eat up every note and sing along with their returning friends. Tonight we get furries old and new. ‘Do or Die’, ‘Hello Sunshine’ and ‘God! Show Me Magic’ sit wonderfully alongside their returning anthem ‘Bing Bong’ – written for Euro 2016. A tiny keyboard malfunction during ‘Juxtaposed With U’ doesn’t stop them during their epic set. Their seminal and traditional closer of ‘The Man Don’t Give A Fuck’ sees the entire audience bouncing along and chanting like a football crowd on good behaviour. Let’s be honest, anyone who doesn’t appreciate the sight of grown men stopping a song, leaving the stage, only to return dressed as yetis to rock out until they dying notes needs to have a think about what entertainment is. Super Furry Animals certainly know how to win over a crowd, and successfully conquered their debut appearance in Swansea.

As the sun begins to set and the gorgeous sunset shows it’s presence, James Dean Bradfield takes to centre stage and launches in to the subtle intro of ‘Elvis Impersonator: Blackpool Pier’, Nicky and Sean step up and as the song kicks in, the entire stadium is bouncing along.

Tonight is all about the celebration. The first half being ‘Everything Must Go’ performed in it’s entirety. ‘Kevin Carter’, ‘Australia’ and ‘Small Black Flowers That Grow In The Sky’ have been performed fairly regularly over the years and tonight there seems to be an emphasis on the rarer performed live tracks such as ‘Interiors’, ‘Further Away’ and the disco infused ‘The Girl Who Wanted To Be God’. It is very strange seeing ‘A Design For Life’ as the second song of the set, but nonetheless it gets the royal singalong it deserves. The first act concludes on a passionate, enthralling and almost punky rendition of ‘No Surface, All Feeling’. The crowd beying for more, James informs us that they will return momentarily for the second act.

As the Stealth Sonic Orchestra remix of ‘A Design For Life’ fades out from the tannoy, James returns to the stage with his trusty acoustic guitar. Joined by Gavin Fitzjohn on trumpet, we get a rendition of ‘Ocean Spray’. This is followed swiftly by the entire audience backing James on vocals as he runs through a cover of Frankie Valli’s ‘I Can’t Take My Eyes Off You’ which reigns on through the night as the rest of the band take to the stage.

The second act kicks off with a sprightly version of ‘Motorcycle Emptiness’. Nicky Wire has now had a costume change and is sporting a modern take on the white sailor suit from The Holy Bible era. The second half is even more about the celebration. ‘Walk Me To The Bridge’, ‘Your Love Alone Is Not Enough’ and ‘Roses In The Hospital’ see fans singing and jumping along in unison. We even get a rare outing for ‘NatWest Barclays Midlands Lloyds’ from their infamous debut.

We even get a debut live performance tonight of the official Wales Euro 2016 Football Anthem ‘Together Stronger (C’mon Wales)’. Despite the audio having only been in the public domain for a couple of weeks, it has already become a singalong of epic proportion. ‘Show Me The Wonder’ makes a welcome return to the live foray again joined by trumpeter Gavin Fitzjohn. There is even a sense of irony as a huge lightning bolt lights up the sky and rain starts to pour down during a rendition of ‘You Stole The Sun From My Heart’. Clearly nothing is going to stop this show. A cover of Fiction Factory’s ‘(Feels Like) Heaven’ leads way to a rauchous explosion of ‘You Love Us’.

Closing the show tonight in lieu of ‘A Design For Life’ is ‘If You Tolerate This Your Children Will Be Next’. Flanked by a huge firework display as the final notes ring out, ‘Tolerate’ bows out in fine style. Tonight has been a party to celebrate not only the 20th Anniversary of a sublime record, but to toast the history of Manic Street Preachers and anticipate what the future holds in store. The boys from Wales never disappoint in the live arena and here’s to hoping that it won’t be long before another run of dates is announced.