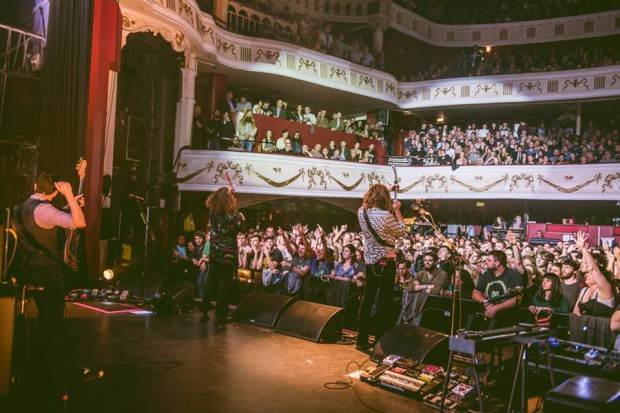 It’s been 16 years since the release of My Morning Jacket’s debut Tennessee Fire, and in that time it’s safe to say they’ve changed quite a bit. The once Southern-rock band has gone on to create a number of critically-acclaimed and genre-spanning albums, earn multiple Grammy award nominations, and even play a bonanza 4-hour headlining set at Bonnaroo in 2008. Tonight however all eyes would be on the stage in Shepherds Bush, West London.

Kicking off proceedings  were Dawes, the Californian quartet were received warmly as they played through a short but nonetheless enjoyable set. Accompanied on stage first by Carl Broemel (MMJ) and his saxophone for a more soulful take on ‘I Can’t Think About It Now’, and Marcus Mumford for a spectacular rendition of ‘’When My Time Comes’’, which earned a particularly enthusiastic response from a crowd singing along to every word.

Finally, the lights dimmed and MMJ emerged, last to arrive was Jim James who, as always, was greeted as an almost messianic figure. Before you could catch your breath the band immediately opened into a spell binding ’Wordless Chorus’, which had audience members flowing into the psychedelic maelstrom that MMJ live shows are famous for. They then moved effortlessly onto ‘Compound Fracture’, a blissful song from their latest release The Waterfall. This was quickly followed by a few classics, including ‘Off the Record’ and ‘Circuital’, the first of which, with it’s bewitching guitar solo, is always a pleasure to experience live.

In a show which was heavily dominated by newer material, the lights once again dimmed leaving Jim James to show just what versatility the Kentucky-based quintet possess. ‘Get the Point’, a stripped back acoustic love song, is a world away from some MMJ songs, and a universe away from others, but this is why they are guaranteed to leave a huge legacy and impact on so many genres of music.

The band continued on playing a few more from their back catalogue. ‘Steam Engine’, a 7-minute guitar-driven epic, was euphoric . This was followed by a few more from the new album, ‘Only Memories Remain’ & ‘Spring (Among The Living)’. The first respectively seemed to channel very well into live performance, and was reminiscent of MMJ’s earliest material. The band closed with ’Magheeta’, a joyful love song which it is rumoured Jim wrote about his guitar (sorry ladies).

The band returned for an encore opening with the first song from Circuital, ‘Victory Dance’. The song’s chorus, “hope to watch the victory dance in the evening’s setting sun”, seemed very appropriate as the evening began drawing to a close. They were then joined on stage by Dawes & Marcus Mumford for a performance of ‘Down on the Bottom’, a song which the former performed with MMJ for the New Basement Tapes. The show came to a close with a few from It Still Moves, ‘Dancefloors’ and ‘One Big Holiday’, which at it’s conclusion earned a widespread standing ovation, something which looked to be deeply appreciated by the band themselves.

Despite never really having a hit per se, it’s incredible to see the effect the group have on the musical world. Their legendary live shows, with such extensive ranges of sounds, can appeal to a huge cross section of music fans, a very elusive ability in 21st century music. Whilst things certainly have changed since the release of Tennessee Fire, one thing is guaranteed to remain the same; if My Morning Jacket continue writing and performing spell binding music to this level they look set to continue defining alternative music for many years to come .