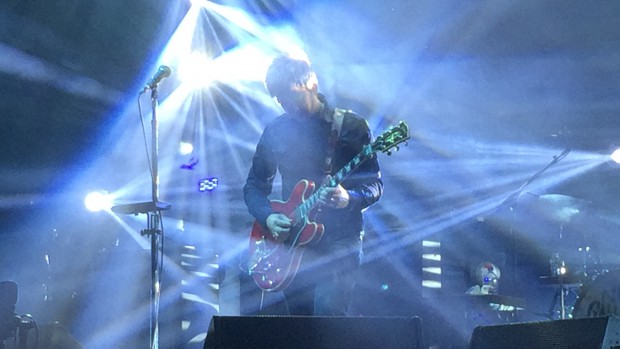 Just over a year after the release of second album ‘Chasing Yesterday’, Noel Gallagher and his High Flying Birds stormed in to the Genting Arena to provide a night full of indie swagger and huge sing-alongs.

Opening tonight for the final time on this tour were Welsh wonders Super Furry Animals. Arriving in plain white boiler suits, Gruff Rhys and co provided 40 minutes worth of hits tinged with their own unique styling. ‘Slow Life’ with it’s hints of techno provided a rousing opening. Other highlights included ‘Do Or Die’, ‘Demons’, ‘The International Language of Screaming’ and their set closer ‘The Man Don’t Give A F**k’. During the latter, the band left the stage only to return a few moments later dressed in their infamous Yeti costumes to bring the 90’s track to a stunning end.

As the clock struck 9pm, the lights in the arena dipped to allow Noel and band to enter the stage. With a brief wave to the crowd, they opened up with the epic ‘Everybody’s On The Run’ which caused the entire venue to partake in a mass singalong.

Rocking straight in to the lost Oasis track ‘Lock All The Doors’, it was clear the Gallagher was here to put on a show. Chatter through the night was kept to a minimum with the odd exception for banter with those on the front rows. Even acknowledging a break in the crowd where someone had been sick, then encouraging everyone to behave when the crowd gets mental.

The mix of songs tonight ranged from the two High Flying Birds albums and a host of Oasis tracks from his former band. The rarer songs from ‘the other band’ included b-sides ‘D’yer Wanna Be A Spaceman?’, ‘Half The World Away’ and ‘The Masterplan’. Noel however, really shone bright on his own solo material. Tracks from the self-titled debut such as ‘The Death of You and Me’, ‘If I Had A Gun’ and ‘AKA… What A Life’ sounded epic and swirling alongside his back catalogue and mixed perfectly with songs from the last album such as; ‘Riverman’, ‘In The Heat of The Moment’ and ‘You Know We Can’t Go Back’. ‘Ballad of The Mighty I’ came criminally mid-set but was outshone by a heavy rendition of ‘The Mexican’.

Tonight, Noel didn’t need any theatrics or special guests to exemplify his showmanship, it was all down to his pure raw talent. Seen to be situated at the side of the stage however was Serge from Kasabian, who had that day announced their homecoming shows in Leicester. Noel did briefly dedicate ‘D’yer Wanna Be A Spaceman?’ in his honour.

Set highlight tonight came during the encore in the form of ‘(I Wanna Live A Dream In My) Record Machine’. The tracks’ Beatles-esque psychedelia really excelled in the large venue and layers of sound built upon his trusty vocals. This gave way to the finale of ‘AKA… What A Life’ followed by the biggest singalong of the night in the form of ‘Don’t Look Back In Anger’.

People may still be pining for the heady days of Oasis, but for now, Noel has found his calling and is doing what he does best: creating anthems and performing live, making everyone in the room feel intimate and special. The sell-out tour should reassure ‘The Chief’ that he is in the right place.