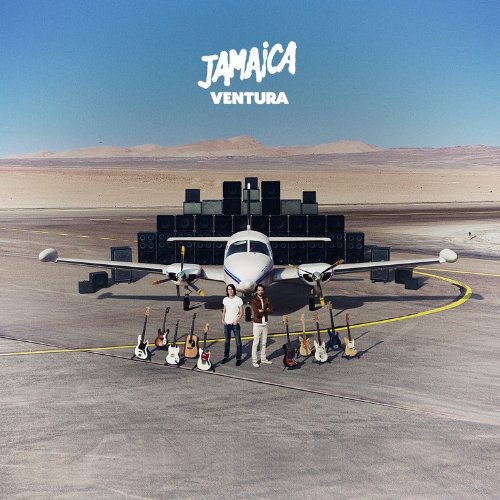 Parisian indie-rock duo Jamaica caught the attention of listeners in their native France and beyond with their 2012 debut No Problem. Comparisons with their French forefathers Phoenix were rife, as were compliments about the band’s blend of 80s rock and pop influences. Three years on, they’ve returned with Ventura, a lively, infectiously catchy record that manages to build upon the groundwork laid in their impressive first effort, culminating in an album that simultaneously manages to be immensely enjoyable, and surprisingly thoughtful.

Album opener ‘Two on Two’ is filled with wall-to-wall hooks. From its opening chords, it builds to a hugely satisfying chorus, with the addition of a piano adding a lighter, poppier sound into the mix. Antoine Hilaire ‘s smooth yet angsty vocals rest squarely at the front of the mix, before he steps back to make room for a screaming guitar solo. It’s a rousing opening to the album, and there’s certainly little chance to get bored from here on in.

There’s a prevalent 80s influence running through most of the album, from the sustained synths and prominent bass lines in ‘Hello Again’ to the Soft Cell-esque ‘Same Smile’. ‘Golden Times’ (featuring guest vocals from TV On the Radio’s Tunde Adebimpe) slows things down a little, its gentle, reverberating chords and palm-muted riffs perfectly complimented by the synths added into the mix at the chorus. ‘Ferris Willer’ takes things in a slightly heavier direction, its pounding bass drum adding a primal edge to an otherwise slick and perfectly-produced piece of synth-rock. This heavier sound culminates in the brilliant instrumental track ‘Turbo’, whose bass riffs and shuddering guitars meld together in three minutes of rock-inspired madness.

The musical combination of Hilaire and Florent Lyonnet is obviously a potent one; Ventura’s claustrophobic sense of energy seeps into every level of their multi-layered arrangements. It’s little wonder that such concentrated energy has been thrust into the record; the pair were shut away for a month in the San Fernando Valley while writing and recording the record, staying in a house/makeshift studio on the remote Ventura Boulevard.

Working first with Peter Franco (Daft Punk), and then heading to Laurent d’Herbécourt’s (Phoenix) Paris studio for the final mix, the band describe the resulting sound as “a sunny pop that hides more sensibility when one really pays attention”, and that’s a pretty good way of putting it.

At first listen, Ventura is a collection of catchy indie-rock songs whose debt to the likes of Phoenix, The Strokes, and 80s synth-pop in general, are easy to detect. Listen more deeply, and you realize just how brilliantly those influences have been stripped down and re-built to fit Jamaica’s own enjoyable brand of indie-rock. It’s retro, but not derivative, and that’s a hard balance to strike.

Hopefully we get the summer to match the tunes.

Ventura is released on March 31st via Control Freak.