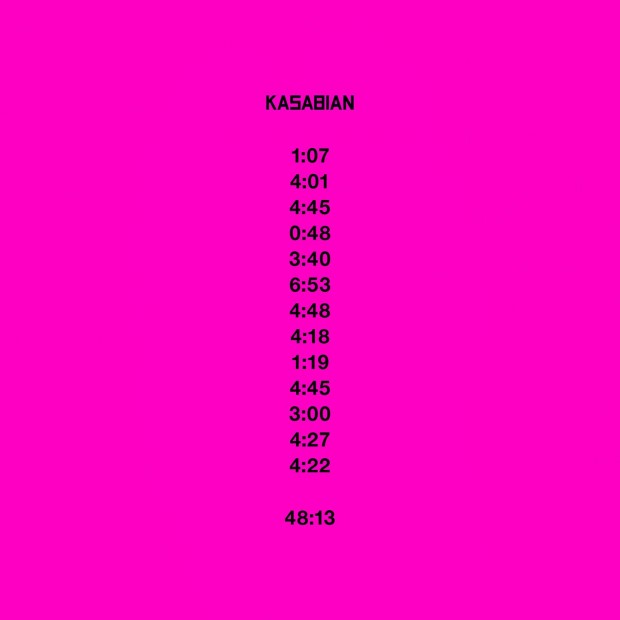 Usually, by the time bands have hit their fifth album, they have either reformed after a nasty parting of ways, or they have found a winning formula. Kasabian, thankfully are neither. They are a band that constantly pushes boundaries, and this is no exception. In fact, 48:13 could be their most satisfying release to date.

Experimentation is the key to this record. The opening acid scream of ‘bumblebee’ followed by the militia stomp-march of ‘Stevie’ emphasise this with perfection. These are classic Kasabian tracks, loud and rowdy. But, they are experimenting more with beats, less guitars and the kind of ferocious brass section last seen on Beady Eye’s ‘Flick of The Finger’.

Lead single ‘Eez-eh’ does well in giving you a taste that something different is on the cards, but doesn’t give too much away either. ‘Treat’ is the album centre point, and not only does it bring memories of the finer points of Led Zeppelin, but it kicks it screaming into the modern era. The closing third becomes very UNKLE-esque, with it’s trippy soundscape being followed by a surprise spoken word outro from poet Suli Breaks.

If that’s not enough to whet your appetite, the album has ‘Clouds’. Just when you think they have no more tricks up their sleeves, Tom and Co bring out this incredible mix of distorted vocals across a dreamy 60’s rhythm, before it all crashes into a wonderful chorus with electric guitars and brushed electric drumming.

Allowing a breather between tracks are three instrumentals, each again, very different. The opening album track ‘(shiva)’ sees a wurlitzer drone in over some almost tribal drums, ‘(mortis)’ actually sounds so medieval, you would think 90’s indie prevailers Kula Shaker had been resurrected. Finally ‘(Levitation)’ brings us back to the 60’s with some dreamy acoustica.

When ‘Doomsday’ starts, you could be forgiven for thinking you have put a Reverend & The Makers album. Until the chorus kicks in, at least. This track proves Kasabian are having fun with the fact that they’re taking the guitars away from the limelight, and allowing the rest of the music to speak.

The album’s ending couldn’t be any more perfect. ‘Bow’ sees Serge singing at a tone lower than normal, and sounding very impressive for it. Mixing with Tom’s higher tones. This is surely a semi re-invention within a record full of re-invention. But the closing ‘S.P.S.’ is the icing on the cake. A wonderfully different, summery acoustic track, it again sees changes in vocal tones, but is an absolute stunning end to a very experimental yet rock n roll, military-esque album.

On the strength of this album, Kasabian could save ‘British Rock n Roll’ from the slums of the last few years, probably pulling the bandwagon along for the ride. Glastonbury should see this album showcased highly, and also cement Kasabian as a worthy headline act.