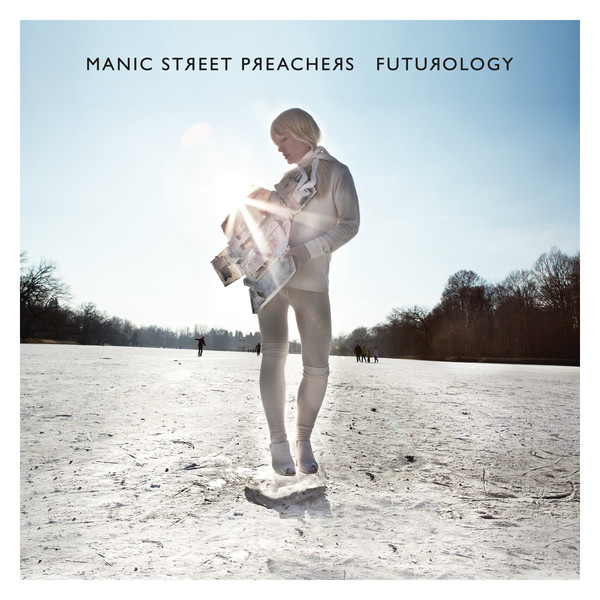 A little over 9 months since their last album release, a succession of UK and European tours and the start of a busy festival season, Welsh heroes Manic Street Preachers return with their 12th album. Simply titled Futurology, the title lends itself to the classic Manics’ manifesto of curiosity. Questioning everything around them, reminiscing and also considering the future.

The album starts with a bubbling of electronica before giving way to the title track. James Dean Bradfield’s uniquely powerful vocals sound as strong as ever as he launches in to the track. Given a debut outing on the recent UK tour, the track features a duet between Brdfield and bassist Nicky Wire. Wire’s vocals on the chorus sounding more conditioned to singing now than many of his early efforts. A joyous follow on from the melancholic, spine tingling ending of ’30-year War’ from last years’ Rewind The Film.

The sound of the whole album is exactly as they have described, it is a very European inspired sound. First single ‘Walk Me To The Bridge’ is the perfect sample, whereas ‘Europa Geht Durch Mich’ is possibly the strongest thing they have recorded in years simply for being so uncharacteristically Manics. Featuring German actress Nina Hoss on vocals, both tracks are a perfect slab on Euro-rock.

‘Let’s Go To War’ is a call to arms that would not sound out of place on Journal For Plague Lovers or even the more frought parts of Know Your Enemy. Even having a riff that sounds suspiciously like ‘In The Hall of The Mountain King’, it lends it’self to an eerie undertone as the track questions the ideals of war itself. One thing that stands out across the record is the thunderous drumming of Sean Moore. With his drumming slightly more in focus you really get the sense of a European drive running across all of the tracks.

‘Divine Youth’ features the vocal talents of Welsh singer/harpist and Welsh Music Prize Winner 2013; Georgia Ruth . Her delicate and fragile tones make this duet with Bradfield sound like the counterpart to Cate le Bon’s duet on Rewind The Film. James’ vocals work well with Ruth’s and begin to soar towards the end which only lifts the track on to another etheral plane.

‘Sex, Power, Love and Money’ is again very different. Sounding like a Clash cast off, it sees James talk/rapping the verses over a fun guitar line mixed with a ‘Rock The Kasbah’ type rhythm section before a killer chorus and solo brings the song back to sounding like it could easily have come striaght from Generation Terrorists.

The Manics have always questioned their output and rebelled against their last release. Where they excel is when they stand back and part indulge themselves, yet half push their own boundaries. Futurology is the sound of a band experimenting and having fun doing so. Finally letting go of the idea for “one last shot at mass communication”, it seems ironic that in doing so, they have created an album which has the potential to become another huge hit for them.

‘Between The Clock And The Bed’ features guest vocals from Scritti Politti frontman Green Gartside. A soft tinged track with a wonderful chorus sees the perfect blend of Gartside and Bradfield’s vocals. James’ vocals are impressive at the best of times, yet whilst sounding more mature these days, there is still a Welsh fire burning deep within that begins to creep through as the track fades in to an almost Super Furry Animals inspired outro.

Manic instrumentals used to be a much sought after rarity hidden away in the days of ‘b-side land’. After having the confidence to put the wonderful ‘Manorbier’ on the last album, Futurology showcases two. The 80’s Simple Minds influenced ‘Dreaming A City (Hugheskova)’ and the closing track ‘Mayakovsky’. Following the acoustic and reflective ‘The View From Stow Hill’, ‘Mayakovsky’ closes the album in typical Manic Welsh perfection with electric guitars being stabbed and ghostly vocals repeating the title again and again.

‘The View From Stow Hill’ could easily have sat on Rewind The Film too but with it’s hum of electronic beats running through, showcases a wonderful breath of fresh air at the end of a fantastic album. Bradfield sounding mournful at the reflective nature of reminiscing running through the lyrics.  The ever-changing scenery being the main theme, it is a stunning way to close the lyrical content of the album. Yet another of the many highlights on this record.

At the end of the giant o2 Arena gig back in 2011, the Manics declared that they would take a 2 year hiatus. If the result is an album as focussed and brilliant as this, I am all for a mini hiatus. They have never sounded so confident and relaxed on record since Everything Must Go. Futurology is up there sitting proudly amongst the back catalogue and will be one that fans reach for again and again. Impresssive, experimental and wonderfully Euro-Welsh.