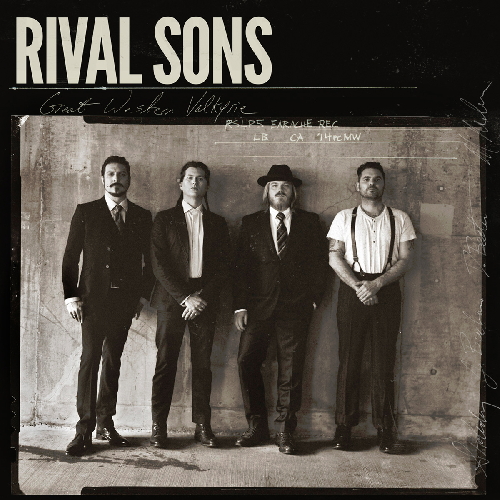 Every time a bluesy-rock band puts out a new album it is always a bit cringe-worthy when they are inevitably compared to the Black Keys. However, Rival Sons’ latest album is entirely in a league of its own. The Long Beach rock-quartet is due to release their fifth studio album, Great Western Valkyrie, following their 2012 record Head Down.

Sun-soaked and summer-fueled, the record is brimming with equal parts of moody classic rock and riff heavy bluesy. Front man Jay Buchanan’s vocals are soulful and unwavering throughout Great Western Valkyrie and Scott Holiday’s fretwork is searing hot, evoking an era of rock n’ roll riffing that is rarely attainable in modern production.

With the departure of their former bassist, Rival Sons enlisted their long-time friend, Dave Beste (Maroon5, Rocco Deluca and The Burden) to assist them in the studio to record the album. Recorded earlier in January of this year, the band returned to Honey Pye studios in Nashville to once again partner with producer Dave Cobb, to attempt a more cohesive album than their previous discography. “We felt a big desire to make a few left turns musically on this record – which we did. You will get the rock n roll but on several tracks you get something much more hybrid.”

Jay Buchanan wails, “yeah hot lady, hot lady, you’re my sexy girl,” in the record’s opening track ‘Electric Man. As the album’s most Black-Keys-sounding track, it is an irresistible rock tune. ‘Good Luck’ pulls the energy back, taking a more psychedelic bluesy approach before ‘Secret’ finds a happy medium between raucous and bluesy, setting the scene for the rest of the album. Great Western Valkyrie’s lead single, ‘Open My Eyes’ grinds out with a pumping distorted guitar riff and the occasional Led Zeppelin inspired acoustic tinkling while Buchanan pleads “Somebody come and open my eyes.”  At the end of the record, he pushes his vocals to their limit, falling in an out of falsetto in a delicate ballad titled ‘Destination On Course’ which cathartically ends in a wild cacophony of clamor and dissonance.

Rival Sons manage to achieve a gritty atmosphere without compromising the quality of their sound. The vocals are clean and vibrant, while Beste’s bass and Holiday’s guitar are only distorted when necessary. As a whole, Great Western Valkyrie is a robust and passionate bluesy rock album that begs to be pumped out of the car windows on a sunny day as a reminder that Rock N’ Roll is most definitely not dead.

Great Western Valkyrie is out on the UK on 9 June through Earache Records.