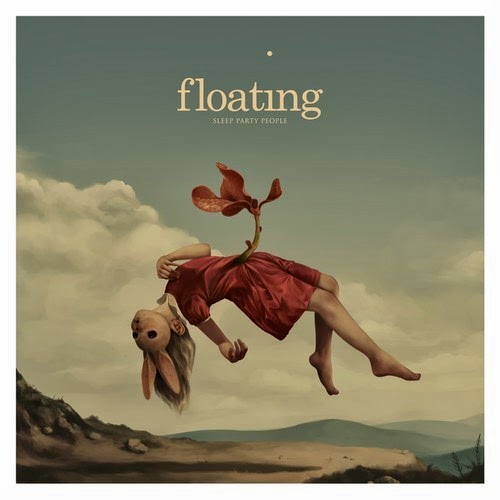 Solo artists under the guise of music projects are growing in popularity at the moment. After the success of M83 and Bastille, they seem to be gaining momentum. Brian Batz is the guy behind music project Sleep Party People. He started it up in 2008 after being inspired by many artists including Erik Satie, famous for his series of work named ‘Gymnopédies‘ (YouTube it – you’ll recognise it!). Having already released two albums and toured the UK, the Danish musician seems to be going from strength to strength, something latest album Floating attests to.

Floating opens with ‘Change In Time’. It’s got a very relaxed feel to it, and there’s definitely a 70s hippy vibe going on. The lyrics are a little lost under all the effects layered on the vocals, but you don’t actually need to hear them – it’s just a nice sound. The synths at the end gets slowly heavier and heavier, almost creeping up on the listener. ‘Floating Blood Of Mine’ is calmer, and again has that hippy feel to it. There’s a guitar riff in the chorus that’s slightly reminiscent of Coldplay’s X&Y days, and it also sounds as though there’s a sample from a film towards the end which is really intriguing. ‘A Stranger Among Us’ feels confusing, erratic even, in comparison – it may grow with future listens and does have a good rhythm and bass lines, but on first hearing isn’t particularly pleasant to listen to.

First single to be released from this album – ‘In Another World’ – starts off slightly sinisterly; the drums temporarily mask this, but as soon as the vocals kick in it’s back to being plain old creepy. This unnerving sensation flows on into ‘Death Is The Future’. Its eerie synths and space-y feel (emphasised by the mention of the word “future” in the track’s title), and instrumental nature, only add to this. ‘I See The Sun, Harold follows in the same vein, but the incorporation of the word “sun”, along with the additional piano, gives a slightly more optimistic feel to this track.

‘I See The Moon’ is more of a traditional ‘song’- offering momentary relief for the ears. Its multiple layers go on and on in much the same way, but with slight variations added every so often to spice it up a bit. At almost 8 minutes long, it does drag slightly if you’re really studying it and listening, but as background music it’s pleasant enough. Lisa Light’s vocals are spectral; hardly there at all. It’s a perfect match.

Penultimate track ‘Only A Shadow’ is slightly more melancholy, and is more of a piano-led track. Strange vocals over the top give the listener something to focus on, although there are effects that are so heavy on the vocals that it’s hard to make out the lyrics. Final track ‘Scattered Glass’ has vocals floating over the top of the other instruments. The chorus is lovely and soothing, and the melody is blissful. The synths get a bit crazy towards the end, but hey – why not, it’s the last track of the album.

Its strange blend of unnerving and ethereal, of hippy and space age sounds, make Floating a very interesting prospect. A curious listen indeed.

Floating is out now via Blood and Biscuits.