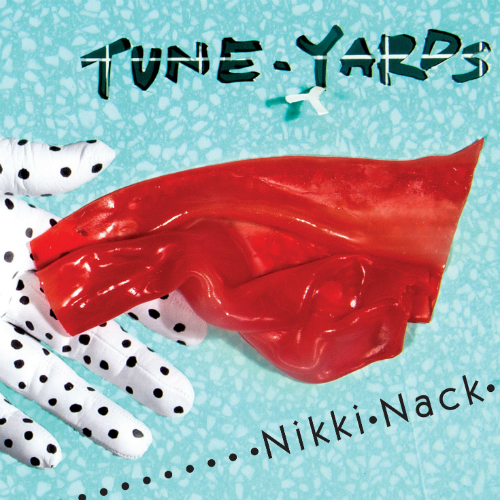 Emerging from a history of fiercely self-produced music, California-based duo Tune-Yards have returned with their third full-length album, Nikki Nack. Following on from their 2009 GarageBand-produced Birdbrains, and 2011’s studio recorded w h o k i l l, this latest record sees the band grow even further, putting a bright and energetic new spin on their unprecedented sound.

Nikki Nack dives deeper into the Tune-Yards rabbit hole, with heavily percussive and unpredictable tracks. Powered by raw drum loops and Merrill Garbus’ signature chanting, the record stands testimony to the band’s unorthodox yet inviting syncopation. Producers John Hill (Rihanna, MIA, Shakira) and Malay (Frank Ocean, Alicia Keys, Big Boi) assist on the album, contributing their own styles to individual tracks, despite Garbus’ desire to keep her music production equality-conscious. “I have a very specific vision for the sound of the band and I don’t think women producers get enough credit for doing their own stuff, so I was resistant…but it turns out that’s what’s most important; the songs, not my ego.”

Tracks like ‘Water Fountain’ and ‘Sink-O’ showcase the band’s unique talent of turning vocal noises into dynamic musical textures. While this instrumentalisation of Garbus’s voice has been a strong element to their music in the past, Nikki Nack experiments further with the technique in what Garbus’ described as “cool rhythmic games.”

Rather than producing a typical harmonic tune, Tune-Yards use their instruments to explore new sounds altogether. Named after a jump-rope chant title, the album continues with the fun schoolyard theme with the lead single, ‘Water Fountain’, stomping out like a playground Double Dutch showdown.

‘Why Do We Dine on the Tots?’ is a bizarre and surreal interlude narrated by layers of Garbus’ voice in the style of a children’s short story. Laced with musical sounds and the darkly amusing plot twist, the track is an example of the influence Pee-wee’s Playhouse has had on the mood of the album. In addition to a trip to Haiti, catching up on the late 80’s television show reportedly had a significant effect on the attitude of the album.

Later on, ‘Rocking Chair’ calls out in the spirit of the Dixie Cups’ ‘Iko Iko’ with assistance of an old fiddle (likely influenced by Haiti), before ‘Manchild’ closes the album with subtle sci-fi wubbing beneath a spiteful call for respect of consent as Garbus calls out “not gonna’ say yes when what I really mean is no / not gonna’ say no unless you know I mean it.”

Honestly written and produced, Nikki Nack stays true to Tune-Yards’ principles, leaving behind a fascinating and wild adventure, rather than a predictable, clean pop record.

Nikki Nack releases on 5 May by 4AD Records.