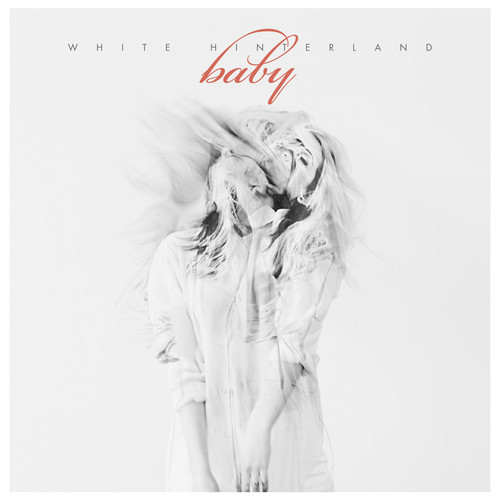 It is perhaps strange that Baby, the second album from the Portland-based White Hinterland, should enter the public domain just as bonafide weird-pop icon Kate Bush re-emerges into the public eye. Having made her mark on over three decades worth of music, Bush’s distinctive blend of pop, classical and electronic influences has heavily contributed to her rightful reputation as one of the best songwriters this country has ever produced. White Hinterland’s similar mastery of multiple styles and genres is equally impressive, and shows there’s some hope for the future of alternative pop, even after Bush’s momentary return to the spotlight. White Hinterland are in fact classically-trained musician Casey Dienel and artist/musician Shawn Creeden. Currently based out of Portland, the US’s alt-capital, the pair’s collaboration bears strange fruit indeed.

Opener ‘Wait Until Dark’, with its ominous a cappella introduction, is downright unnerving. Dienel’s vocals swell and subside in a chromatic tune that seems almost confrontational in its immediate refusal to lure the listener in with a simple hook or obvious melody. Add in some multi-layered harmonies and deft piano playing, and it grows into a mature, uncompromising song which lays some interesting groundwork for the rest of the album to follow.

In its entirety, Baby provides a curious mix of catchy electronic pop, piano ballads, and experimental, classically-influenced compositions. ‘Ring The Bell’ is a brilliantly catchy piece of electronica, making brilliant use of vocal and brass samples to create a song at once richly textured and surprisingly sparse. Dienel’s voice has a Sia-like quality, adding passion and depth instead of sounding like a vocal sample dropped in amongst those all-important beats. ‘No Devotion’ takes things a step further, adding in some distorted guitar chords to supplement the atmospheric electronics that fade across the track.

Many songs, however, lean further towards the classical end of the spectrum. The dominant brass and piano of ‘Sickle and Sword’ add hints of jazz to proceedings, while the gorgeous soprano chorus that opens ‘Dry Mind’ can’t help but make you think of a certain British Airways advert (or, for classical music buffs, ‘The Flower Duet’ from Lakme). ‘David’s piano-led sound and echoing melodies make for a stunning, vulnerable combination. Album closer ‘Live With You’ is similarly affecting, a perfect example of the underpinning lyricism that, beyond the experimental sound of the album, adds a constant thread for the listener to grasp onto. “Just to have someone to spar against, and I do believe I’ve met my match. Honey, you can be so mean to me, but I give as good as I get”. It’s a touchingly honest portrayal of the joys and heartaches of love, and sharing a life with someone, and a beautiful way to round off the album.

With its eclectic changes in direction and occasional moments of vulnerable, stripped-back beauty, Baby takes great pleasure in tripping you over, then cleaning up the bloody knee it helped create. Raw, vulnerable and relentlessly creative, it’s a fascinating, if slightly bonkers listen; Kate Bush might have some competition after all.

Baby is out now via Dead Oceans.