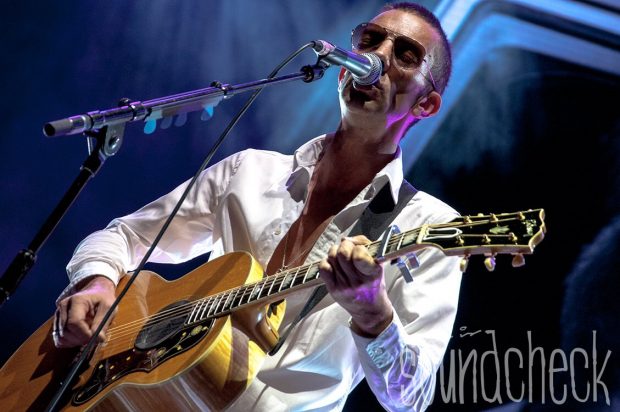 On a rather cold and wet evening in Birmingham, there was a hive of activity in the city’s Barclaycard Arena as Richard Ashcroft – former frontman of 90’s indie legends, The Verve – was in town. Promoting last years’ brilliant comeback album ‘These People’, Ashcroft was playing a handful of live dates ahead of a series of summer festival appearances.

Not only were people arriving early to make sure they had a good place in the crowd for the main act, there was a lot of anticipation for tonight’s support act; Black Grape. Another band making a comeback, Shaun Ryder, Kermit and Co. were brought in to entertain the masses. Ryder was actually in good voice compared to his mid-nineties persona, and delivered a wealth of comedic moments.

Kicking off with the legendary ‘In The Name of The Father’, Ryder seemed to remain routed to the spot whilst co-vocalist Kermit wandered around the stage with the energy. Bringing further hits from their two albums ‘It’s Great When You’re Straight, Yeah’ and ‘Stupid, Stupid, Stupid’ such as; ‘Tramazi Party’, ‘Lil’ Bob’, ‘Yeah, Yeah Brother’ and ‘Kelly’s Heroes’.

Playing for a decent 40 minutes, Black Grape certainly warmed the crowd up perfectly, adding to the major 90’s flavour of the evening. Leaving the stage to a rapturous applause, Ryder declared that he would see us soon when they return with the long-awaited third album this summer.

After a quick change over on stage, soundtracked by some classic indie hits from a DJ at the side of the stage, the lights eventually dimmed ready for the main event. As a remixed version of ‘Hold On’ blares out of the in-house PA, the band arrive on stage followed by Ashcroft wearing a rather dazzlingly bright jacket. In time with the remix, the band launch in to a frantic rendition of ‘Hold On’. This sees Richard echo his stage presence back to the the heady days of The Verve, prowling around the stage spewing out vocals and grinning like a Cheshire Cat as the audience sing back to him.

Before the second song, Richard loses the jacket addresses the crowd “Thank you, thank you! At least I know I have some fans left in Birmingham” he declares with a cheeky laugh to himself. He addresses the fact that tonight he will be nodding towards his past before launching in to a spirited version of ‘Sonnet’. As the song fades out, the audience continue the ‘My Lord’ refrain. Ashcroft instructs his band to follow the audience before kicking back in with an elongated encore of the vocals. It really does feel like the party is in the house tonight.

The majority of the set showcases a handful of tracks from ‘These People’ which fit in perfectly with his entire back catalogue. There are many highlights including; ‘This Is How It Feels’, ‘They Don’t Own Me‘, ‘Music Is Power’, ‘Break The Night With Colour’ and a stunning version of his debut solo single ‘A Song For The Lovers’. The set is brought to a close as it began, with a mass-singalong. The audience’s arms aloft or around their mates as Richard delivers a soulful version of ‘Lucky Man’. The only way this can end is for an endless call for an encore.

Not wanting to let down the arena full of people, the Richard returns to the stage armed only with his acoustic guitar. We get a gorgeous version of ‘You On My Mind In My Sleep’ from his debut record ‘Alone With Everybody’. Sweeping straight in to the penultimate song, another mass-singalong in the form of The Verve classic ‘The Drugs Don’t Work’.

Seeing Ashcroft on a stage is one of the most magical things you could witness. He is a professional performer and certainly puts his heart and soul in to every performance. Chris Martin from Coldplay once described him as “The best rock n’ roll vocal of our generation” – this is certainly true, but when Ashcroft picks up the acoustic guitar and it’s just him, it truly is a sight to behold.

The final song of the evening is a little on the stereotypical side, but it’s the song everyone is waiting for. Tonight we get a rocked up and powerful version of ‘Bittersweet Symphony’. There is not a seat in the house that isn’t up standing and singing along, the standing audience are bellowing out the lyrics like no body can see them. It is a wonderful moment to be a part of, one that certainly brings tonight’s entertainment to a close.

If there had to be a downside, it would probably be that there was too many Verve songs and not enough of his own solo back-catalogue. But this is minimal, when an artist who rarely tours comes to town, you are incredibly happy with what you get. Ashcroft could do with a little more belief in himself and his own work, but nevertheless, for his remaining live dates, those of you who get to witness the shows should be spellbound.