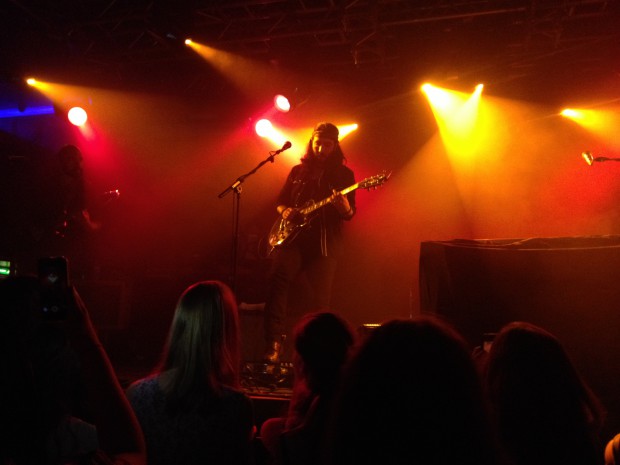 Ron Pope isn’t a stranger to Scotland having played in Glasgow repeatedly in recent years, but tonight he joins the stage in Edinburgh for the first time. In Edinburgh’s Liquid Room, Pope is set to play his first show in the Scottish capital as part of his international tour extending across Australia, Europe, and North America.

Opening for the New York based artist are two English performers; Hannah Trigwell and Nick Howard, both with their own brand of folk-pop. Both artists are sweet and talented, prompting the audience to sing, clap, and dance along to their music. Nick Howard sings love songs and medleys, visibly charming the mostly female audience. The crowd fits comfortably into the main room, and both opening artists have no problems connecting with the audience.

After a brief stage transformation, a puff of blue smoke seeps out from the darkness behind the stage. Ron Pope’s band emerges and begins to play an ethereal interlude, summoning Ron to the stage. Dressed in all black with a folded bandana tied across his head he skips onto the stage clapping as the band set straight into ‘Lick My Wounds’, the first single off his current album, Calling Off The Dogs. He sways around on the stage with a gritty tone of  punk rock for his first few songs. Changing between two different electric guitars for each song he stands in a bed of heavy red light for ‘Push Me Away’. For ‘Wherever You Go’ from 2011’s Whatever It Takes, he switches to a keyboard. After performing ‘In My Bones,’ he pauses for a moment as he prepares to play ‘New Friends’ when a girl in the audience breaks the silence.

“Take your top off!” she shouts.

He hesitates for several seconds before responding with, “Never thought I’d hear that one…” After a launching into few more guitar driven songs, including a short but impressive guitar solo during ‘Silver Spoon’, the band takes a break from the stage leaving Ron to play a couple intimate songs. As the show nears the end, Ron Pope invites the band back to the stage as well as opening artist Hannah Trigwell. With Ron on the keyboard and Hannah beneath the main microphone, the two perform ‘Nothing’, the most recent extended single from Ron’s album.

“Before you go home I have one request,” Pope insists before he plays his final song. “If you bought a ticket to see me I would imagine that you would have heard this song before, and so before you go I would like to have one rip-roaring crazy sing-along. So will all of you sing this song with me?!” The crowd shouts lazily and Ron repeats his request. “That was a bull-shit half-hearted response. I’m gonna’ do it again and if you say no I’m going to play a Frank Ocean cover and then I’m going to go home.” After a quick consideration the audience responds with more energy and Ron Pope plays his most successful single to date, ‘A Drop in the Ocean’.

While the two opening acts seem to connect with the audience more than the headlining performer for most of the night, it is a comfortable and energetic rock performance by a talented group of musicians. With no mention of an encore, the crowd filters out into the warm Edinburgh fog that has descended upon the Grassmarket.