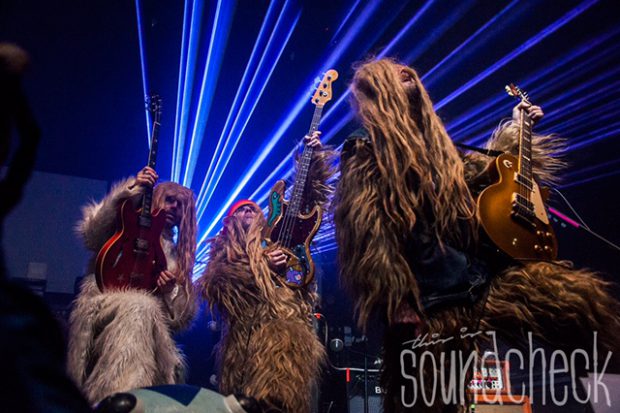 The Super Furry Animals are one of Wales’ greatest exports and one of the most unique and brilliant bands the UK has had to offer for over 20 years. Really, they need no introduction. Fresh off the back of making a long-overdue comeback in 2015, Gruff Rhys and Co. have had a successful Summer headlining festivals across the globe and releasing the Wales alternative football anthem, the insanely brilliant “Bing Bong”. Tonight however, sees a gig of unique stature. They are performing two entire albums back to back, their debut album and it’s follow up.

Arriving on stage amongst an air of dry ice and laser beams, Gruff announces the bands’ billed intentions and holds a giant placard with both titles on. They will commence proceedings with the insane debut ‘Fuzzylogic’ followed by ‘Radiator’. Either of these albums alone, in full would have sufficed, but the double-header is impressive and shows that the Welsh heroes like to do things differently. Whereas their counterparts and fellow brethren; Manic Street Preachers have toured the likes of ‘The Holy Bible’ and then ‘Everything Must Go’, SFA bash both out in one.

The night starts with a fraught and lively version of fan-favourite ‘God! Show Me Magic’ which sees the audience singing along to every word and bouncing around creating mini 90’s style mosh pits. There is clearly a party atmosphere in the venue tonight. Not only are SFA an incredibly fun and tight live band, they have reawaken their fun stride. The stage is adorned with giant teddy bears from yesteryear. One with a clamp around it’s head with a rotating handle, one in the centre of the stage that looks too happy to be there, and others hidden and in plain view.

Across both records tonight we get a mix of classic tracks and some very rarely performed live tracks. All of which go down well with the adorning audience. Some of the highlights from ‘Fuzzylogic’ include; ‘Frisbee’, ‘Gathering Moss’ with its subtle acousticisms drenched in 60’s psychedelia, ‘Mario Man’ and the funky ‘Hangin’ With Howard Marks’. Singles from the album initiate some of the biggest singalongs of the night, naturally. ‘Hometown Unicorn’, ‘If You Don’t Want Me To Destroy You’ and ‘Something 4 The Weekend’ see the standing crowd and even the balconies up on their feet swinging along with the cartoon vibe of the night.

We get a brief moment of solitude after ‘Now And Forever’ and Gruff reaches for his giant card to highlight the “changing of the record” over to the ‘Radiator’ section of the night. Whereas ‘Fuzzylogic’ was the expression of young Welsh angst, ‘Radiator’ showed a fast maturity within the band and offers a more diverse range of tracks alongside the beginnings of there mad experimentation with sounds.

Rolling straight in to ‘Furryvision’, it becomes clear that the band are enjoying themselves. Grinning exchanges between Gruff and guitarist Bunf allow an insight to how much the band not only take things seriously, but enjoy what they do. Again, there are rarely played tracks in this section such as; ‘The Placid Casual’, ‘Down A Different River’ and ‘Bass Tuned To D.E.A.D.’, the wild and explosive ‘Chupacabras’ and their first album Welsh track ‘Torra Fy Ngwallt Yn Hir’ (NB. Which translates as: ‘Cut My Hair Long’).

We do get a few of the bigger hits on this record such as the beautiful ‘Demons’ which again sees the audience over taking the band in terms of vocal volume, ‘Play It Cool’, ‘Herman Loves Pauline’ and the delicate ‘She’s Got Spies’. The set ends on an elongated rendition of ‘Mountain People’, Bunf and Gruff chug out the repetitive guitar stabs as Cian Ciaran’s keyboards bash out a delightful array of sounds along with Guto Pryce’s heavy bass riff. Dafyd Ieuan’s thunderous drums complete the orchestra of sounds as the track comes to a cataclysmic halt.

No Super Furry Animals gig would be complete however, without a performance of what has become their signature tune. The lights dim and a single drone sound engages the stage as Gruff approaches the mic to sing “I spent some time in stormy weather…”. The anticipation in the crowd is building and as soon as the chorus kicks in, the room is again bouncing with arms aloft and fingers pointing towards the band. ‘The Man Don’t Give a F**k’ simply destroys the room. After the second chorus, the band put down their instruments, wave at the crowd and disappear. Cian is the only member to remain on stage, bashing out some serious techno beats to an intense light show. After a few minutes the band return dressed in the now signature yeti costumes. They reclaim their instruments, pose mannequin style in “rock star poses”, building anticipation. Finally the song kicks back to life repeating the infamous refrain over and over, guitars rocking out, Bunf soloing like a trooper. The song continues to build and loop over itself finally coming to an explosive end.

Super Furries are a national treasure and a phenomenally entertaining live band. Let’s hope it’s not another 8 years before they return again. The anticipation amongst Furry Fans is high for more new material, anything, an EP or an album, it would be tragic if they were to disappear again when they have never been so vital.