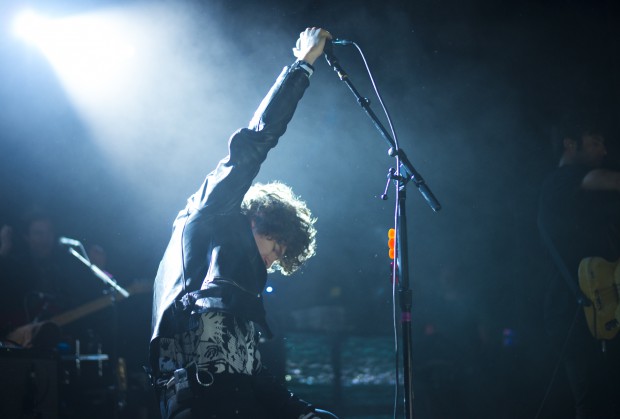 Indie-rock band, THE KOOKS, hit Birmingham’s Institute last night for the final show of their UK mini-tour with the promise of a party. As with many indie-rock bands exploding through the music scene in the mid-2000’s, The Kooks burst into the limelight with thunder: a perfect attraction for an audience of screaming teenage fans what with their addictive riffs and arm waving choruses. Front man Luke Pritchard’s simple yet direct lyrics having a somewhat sixties feel, which he delivers with an almost Jagger like attitude. Eight years since their debut offering, Inside In/Inside Out nothing much has changed.

Opening up as support for The Kooks were Belfast-born Southern. The four-piece band fronted by brother and sister duo Thom and Lucy Southern offered up a short collection of songs which veered from blues-kissed rock’n’roll to a touch of opaque pop-noir. ‘World Don’t Shine’ wrapped up their brief set to a very appreciative Birmingham audience.

The Kooks paraded on to the Institute’s stage amid rapturous applause and an eruption of teenage shrieks. Doing away with any formal introductions they open up with their latest single ‘Down’; the crowd reaction is instantaneous and with very few exceptions, everyone is singing, dancing and waving hands in the air. After one song and with the mood already established it’s straight into ‘Ooh La’; fans chanting along with Prichard’s infectious vocal pitches and swoops. The tempo gets faster, almost exploding into the first bang of the night as The Kooks segue straight into ‘Always Where I Need To Be’.

‘Bad Habit’ a track from the band’s forthcoming album Listen slotted well into the setlist, Alexis Nunez (Drums) and Denton (Bass) driving the pace of the band, after which they moved into the world of indie-pop with ‘Is It Me?’ ‘See The World’ rocked the Institute, fans on the balcony having to be re-seated several times by security as they partied. Hugh Harris (guitar) proved his craftsmanship and the screaming fans appreciated it immensely.

It would be unfair to say that The Kooks raised the roof with every offering of the night as the crowd were unfamiliar with the new material; although the set was a well balanced mix between old and new. Pritchard finally removed his leather jacket after ‘It Was London’ then declared he wanted a “mass sing-a-long” as he strummed into crown favourite ‘She Moves Her Own Way’. As with most bands, it’s the big hits that really get fans going crazy.

The energy level of both band and fans alike is unquestionable: there’s no holding back, mainly because Pritchard is a bit of a loose cannon – climbing up and down the amps and plinths of the stage to further frenzy the fans…but also because these guys are good at what they do. Fans didn’t disappoint, paying the band back with more and more enthusiasm as the night went on.

An acoustic ‘Seaside’ was the highlight for many, it will by far have the most social media uploads of the night’s set; as the Institute was filled with the glow of camera phones capturing the moment. ‘Do You Wanna’ is thumping, showing The Kooks’ have the ability to vary their styles, create musical-magic and keep everybody in their grasp.

A two song encore rounds the night off with ‘Naïve’ as the obvious but ideal choice as the closing track. The intimacy of the Institute is an ideal venue for both band and fans alike. All in all it was an excellent set – well crafted and professionally delivered by a band at the top of their trade.