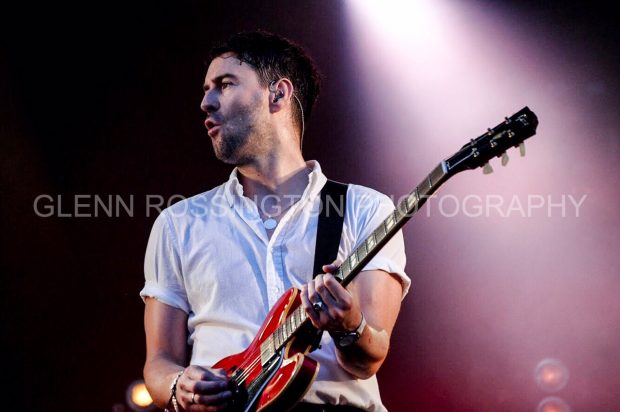 After a victorious first three days of Oxfordshire’s Truck Festival, a quick glance around the site would suggest that this is still early days as there are hardly any signs of the hungover crew you usually find on the last day of a Festival. Now completing it’s 18th year, the event which just seems to get bigger and bigger each year has already boasted heroic sets from the likes of; Friendly Fires, Gaz Coombes, De La Soul, Everything Everything, Circa Waves, George Ezra and more. Today should be no different except they are closing with a bang, a headline set from Manchester’s Courteeners is leading to a flurry of anticipation across the fields.

After going viral last year for having a mosh pit to the sounds of Strauss, The Oxford Symphony Orchestra have returned to open the Main Stage today. Bathed in the sunshine and a blistering heat, the scenes are the complete opposite from last year, but are nonetheless brilliant. Warming up the crowd with a healthy mix of classics from Strauss, Mozart and Vivaldi, they mix their set with covers and interpretations of George Michael’s ‘Faith’ and Meatloaf’s ‘Bat Out Of Hell’. The crowd loves them and gives them a wonderful reception that is truly deserved.

To get the best out of today, the stage times have allowed for people to wander between stages and not miss too much. The Market Stage is host to a whole host of fantastic artists, most are fast-rising stars or are on the cusp of greatness. Today’s shenanigans begin with London’s Hey Charlie. The three-piece offer up a set of lost 90’s grunge with a flavour of modern pop. Singles ‘Hey’ and ‘Love Machine’ stand out well as the girls show off their potential and win over a load of new followers. It doesn’t just stop there however, throughout the day, the audience in the tent seems to expand to it’s full capacity as artists such as Bloxx, High Tyde, The Orielles, The Magic Gang and headliner Rat Boy all chip in with their unique brands of pop, rock n’ roll and punk.

The Nest is home to some old favourites and new friends throughout the day. IToldYouIWouldEatYou, Orchards, Happy Accidents, Delta Sleep and The Spook School all bring in a decent sized crowd with each performance. Bristol’s Turbowolf bring a loud riotous sub-headline set to the intimate tent before the main act of We Are Scientists who arrive like old friends. “Oh hello, it’s you!” declares frontman Keith Murray as the three-piece arrive to celebratory cheers before launching in to a hit laden set with the likes of ‘Too Late’, ‘Buckle’, ‘One In, One Out’ and the classic ‘Nobody Move, Nobody Get Hurt’.

Other mentions must go out to The Cosmics and The Surrenders over in The Barn who both put in brilliant performances which seems to ricochet around the intimate setting of the former cow shed. Two acts who are deemed for much bigger settings of the quality of their shows are anything to go by.

Heading back to the main stage, today has a very impressive line up. Boasting the likes of Low Island, King No-One and Blanaevon early on, the audience camping out in the front rows are treated to some quality performances, even if the acts aren’t to everyone’s tastes, by the end of the respective sets, the audience are bopping along like long time fans. By early evening however, the stakes are raised. Starting with The Amazons, who are making an appearance whilst recording album number two, there is an air of anticipation wafting over the crowd as they launch in to a high octane set. ‘Stay With Me’, ‘Ultraviolet’ and ‘Holy Roller’ electrify the swollen audience and by the time they leave the stage, the mass crowd have really come alive.

The penultimate set tonight comes from Birmingham’s Editors. Pulling in a huge crowd and kicking off with the stunning ‘Hallelujah (So Low)’ from latest album ‘Violence’, they simply do not fail. Tom Smith’s antics as a frontman are incredible. Vaulting across the stage from piano to guitar or prowling across the stage, he has the ability to make the biggest situations feel so intimate. They play a healthy mix from the newest album; ‘Darkness At The Door’, ‘Nothingness’ and ‘Violence’ alongside older and classic hits; ‘Smokers Outside The Hospital Doors’, ‘Blood’, ‘An End Has A Start’, ‘Munich’ and ‘Papillon’. As closing track ‘Magazine’ blasts out, you cannot help but ask why a band of this calibre are not in the headlining slot tonight.

That question is soon answered as Manchester’s Courteeners arrive to one of the biggest crowds of the weekend and launch straight in to ‘Are You In Love With A Notion?’. The mighty Courteeners are quite simply “a band of the people”. Having built up their career without much help from Commercial Radio and TV station support, it is impressive that Liam Fray and Company can command an audience with so much ease, all from their own hard work. Of course we get the hits, the People’s Oasis of the 2000’s bring in classics from ‘St Jude’ right through to latest record ‘Mapping The Rendezvous’. ‘Cavorting’ is an early spectacle and sees the first of many flares lit up in the audience. ‘How Good It Was’, ‘The Opener’, ‘Take Over The World’, ‘Fallowfield Hillbilly’, ‘Lose Control’ and ‘The 17th’ show the many sides of the band and bring the ecstatic audience to the pinnacle of ultimate joy.

By the time of the encore, the mass audience are simply a huge pool of joy as they launch into ‘Modern Love’ and ‘Here Come The Young Men’. One of the wildest moments come as ‘Not Nineteen Forever’ arrives, an anthem of a generation to most here tonight, and sees even more flares spark up, much to the annoyance of the security. Liam takes a moment to thank us for the continued support and for watching tonight as the band start up final track ‘What Took You So Long?’. A firework show begins as the final notes are played out which signals the end of the Main Stage antics for another year. A few DJs in the various tented stages are continuing on until the early hours for those revellers who are staying over.

Truck Festival may not be a festival that is known to the masses, but that is part of it’s brilliance. A safe and family friendly event, close to local amenities and transport links to the rest of the country, this is definitely one to experience if you fancy a whole host of great and varied acts. This year has excelled at the line up and one can only imagine that next year will be just as strong. Thank You Truck!