Babyshambles – Sequel to the Prequel 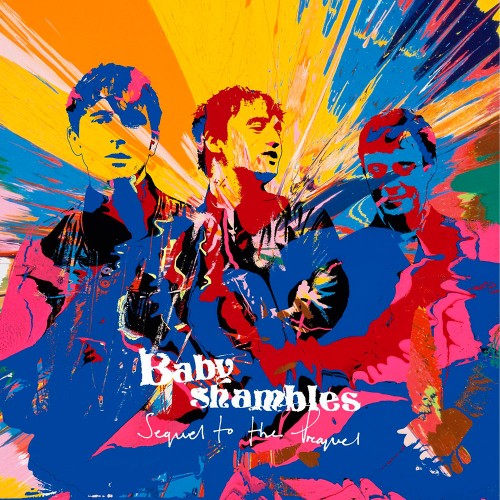 After a semi hiatus, Babyshambles return with a bang! From the opening riot enduring notes of ‘Fireman’ through to the cataclysmic trail off of ‘Minefield’, this is the sound of a band returning to remind long term fans that they are serious.

New single ‘Nothing Comes To Nothing’ sees Doherty in a crooning and almost soulful delivery. He sounds confident for the first time in a long while. Across the album, the songs are given a massive boost by fellow contemporaries Adam Ficek on drums, Drew McConnell on Bass and Mick Whitnell driving things along on lead guitar.

‘New Pair’ sees an acoustic lament teeter into the fray and brings out a softer side of Doherty’s vocals. The ghostly backing vocals add a new dimension to their sound before the picking electric guitar line dances across the remainder of the track.

These songs already sound familiar, but this may be down to the fact that Babyshambles have honed their sound down to a tee. The familiarity gives way to a new sense of positivity. Doherty seems to have put his past issues behind him and seems focussed on this new record. ‘Farmers Daughter’ seems to exude a new way of story telling from Peter, whilst ‘Fall From Grace’ showcases an almost country music style. Hard to believe the wild boy of noughts rock n’ roll could be calming down let alone being influenced by the sounds of the Virginia plains.

‘Maybelline’ sees the return of the indie inspired rock n’ roll. Not quite as raucous as past endeavours, but it will see plenty of dancing and swinging along in a live arena. The title track starts with the sound of a home recording sounding rather interesting with just Pete and a guitar before a honky-tonk piano kicks in and takes us back to the world of the 1920’s almost.

‘Dr No’ brings in a fabulous two-tone sound that isn’t far off sounding like ‘Ghost Town’. Doherty sounds dangerous but very at home in this style. ‘Penguins’ sees Whitnell bringing in a sly guitar line before cranking it up to 11 for a couple of power notes. The song slides in and out of this with Doherty crooning “We could see penguins, penguins are great!” The song then shifts a gear and becomes very 90’s britpop sounding, you could almost imagine Noel Gallagher blazing out the solo.

‘Picture Me In A Hospital’ sees Doherty return to (I didn’t want to use this analogy) a Libertines style of delivery. Replace the acoustic guitars with electrics and this is easily the most libs-esque track on the album. ‘Seven Shades’ borrows slightly from The Kinks ‘Waterloo Sunset’ from the intro then kicks into a perfectly crafted pop song. The finalé of ‘Minefield’ is the sound of a band letting go. Forgetting all the rules and just experimenting. Starting slowly and building to a huge finish. Guitars creep louder and louder, the bass tiptoes along in a groovy way and the drums just propel the track forward.

All in all ‘Sequel To The Prequel’ is a great return to the public eye. It may not win them any new followers in great numbers, but it reminds the old fans that the spirit of Albion is not dead. Doherty has not sounded this focussed in years and it is good to hear. The surprising factor for me the the amount of tracks that feature an acoustic guitar. This is no bad thing as Doherty’s voice has changed. It brings out the delicate beauty he has kept hidden for a while.