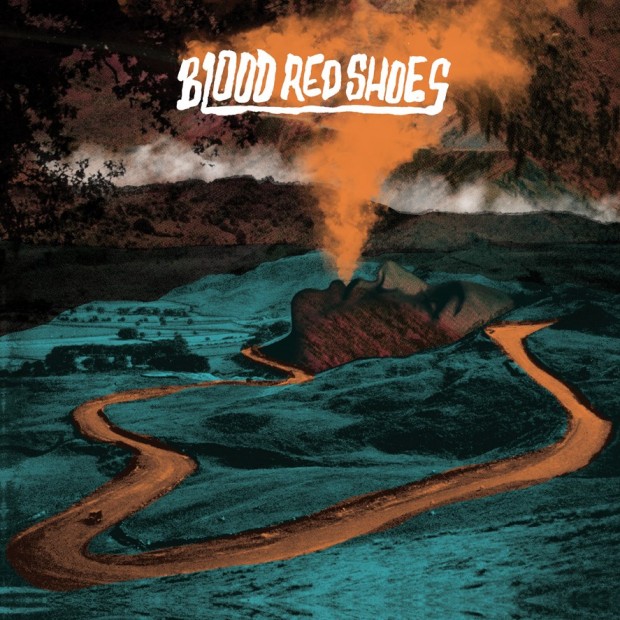 Sometimes it is very easy to forget that the Brighton-based band Blood Red Shoes are, in fact, only a duo. The sheer volume of noise they create is phenomenal;  Blood Red Shoes, their fourth album, is no exception.

Kicking off with the fuzzy-riffed instrumental ‘Welcome Home’, you can instantly detect the sense of urgency behind this record. Fading out, it kicks straight into ‘Everything All At Once, which sees drummer Steven Ansell take lead vocals over a spikey guitar riff and his signature thunderous drumming.

Steven’s vocals seem to dominate this record, with Laura Mary Carter popping up on only a couple of lead tracks, duets and backing vocals (first single from the album ‘The Perfect Mess’ being one of them). However, Laura Mary’s impressive guitar work has never sounded so refreshing, fuzzy, loud and riff heavy. ‘Grey Smoke’ manages to sound like something Black Rebel Motorcycle Club would be screaming for.

New single ‘An Animal’ has possibly the strongest repeated riff since their ‘Heartsink’ single. Combined with drums and Steven’s strong vocal style, it is a three-minute blast of indie/rock perfection. ‘Speech Coma’ starts with a reverberating, ghostly vocal before kicking in to another riff heavy, fuzzed up bundle of joy. ‘Stranger’ takes on a slower pace to the rest of the album. Laura’s vocals shine in its semi-lustful and silky tone, over an almost digital piano and some slow drumming.

‘Don’t Get Caught’ regains the spikey riff leading into a power chorded chorus, with Steven’s lead vocals backed up by an almost angellic Laura Mary. ‘Cigarettes In The Dark’ starts with an a capella from Laura as a low muted riff picks up in the background. It is certainly something a little different, and becomes another highlight of the record. The chorus doesn’t go without a few power chords, but it all works so well. The album closes on ‘Tightwire,’ which lures you into believing it’s a complete piano ballad, before a great drum riff takes ove,r aided by Steven’s last vocal display for the verse and Laura leading the chorus.

Overall this is another impressive outing from Blood Red Shoes and sits perfectly alongside their back catalogue. If this doesn’t help to aide their growing reputation in the UK, then we must be living in a very crazy world. Blood Red Shoes the band, and now the album, deserve your attention. They should be a real highlight across the festival season.