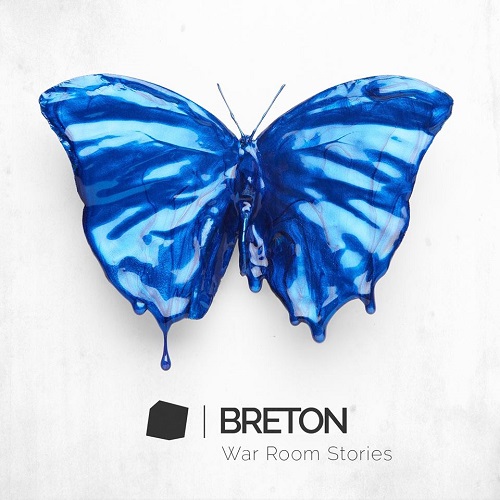 From London to Berlin, Breton prove that a change of scenery is the perfect aid to the ‘difficult second album’ curse. Starting out originally as an ‘art collective’, the five-piece could be found burrowed away in a squat in Elephant and Castle. Random musical sampling and film soundtracking led them down a musical path which resulted in the recording of their 2012 debut Other People’s Problems. A year later, and the London lads were left without a creative hub when their lovingly named BretonLABS squat was bulldozed to the ground. Where else then could they possibly choose to record their second album War Room Stories, but in an old broadcasting studio located in the depths of Berlin?!

Infectiously complicated layered beats feature heavily throughout the album, with every sample sounding as if it has been meticulously planned to fit just right when slathered on top of one another. First single release and album opener ‘Envy’ is about as pop-tastic as the guys get, with continuous upbeat jaunty keys and steel drums, evoking the same shimmering summeriness of early Foals. “You’re a tourist, there’s nothing wrong with that” sings frontman Roman Rappak – the London boy obviously aware of his Berlin location – with a vocal style that unfortunately sounds – at times – like a half-arsed Yannis Philippakis imitation.

Things get a little weirder on War Room Stories than on their debut, which makes for an intricate, fascinating, multi-layered listen. The sparse electro beats and chilled drums of ‘Closed Category’ are accompanied by the sounds of the Macedonian Radio Symphonic Orchestra. The use of the Orchestra adds an unexpected beauty to Breton’s relentless indietronica, especially on ‘S4’ with its atmospheric layers of clattering drums, shimmering synths and short bursts of violin.

There’s a world music influence in ‘302 Watchtowers’, with what sounds like jangling wind chimes and Eastern style vocal wailing fading in and out in the background. Not short of creative ideas, album closer ‘Fifteen Minutes’ ends with a few seconds of insect noise, which was recorded in the overgrown depths of the old Berlin broadcasting house. Search Party has more of an indie sound, with a rolling, danceable melody that is the perfect pop follow-on from ‘Envy’. When Breton’s amazing abilities at carving the perfect indie electronica melodies are fully embraced, is when they truly come into their own.

War Room Stories is an accomplished second album, taking the listener on a multi-layered journey which may need to be played through twice before all of its musical genius can be fully digested. An ambitious, interesting and fresh second album from the Breton guys.