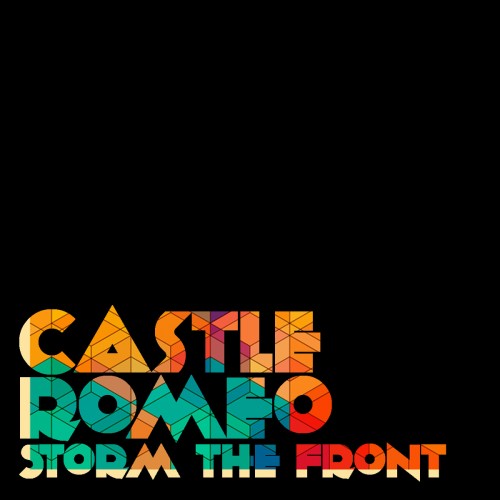 Castle Romeo are a Rock ‘N’ Roll duo hailing from Stourbridge here in the West Midlands. Their sound is a very eclectic bag and I can draw initial references from Iron Maiden, Guns ‘N’ Roses and Muse. Indirect music influences that I can hear also include Feeder, Paul Weller and Jeff Buckley. Considering they are only the two members strong, it is fair to say that upon hearing them on record, you assume so much more. Delivering a riotous sound of heavy riffing and thunderous drumming, you would be mistaken to think you had fallen back into a world dominated by Iron Maiden.

Opening track ‘No Dice’ sounds like a hybrid of Led Zeppelin and early Maiden. With the subtle chorus of “No dice, I’m not going to play this game” you would be forgiven for thinking vocalist K.D. Lloyd has been going through a slight grievance with life in general. The drumming of L.T.D. Scott is impressive. If a full record becomes an option for these young guys, then I think a slightly heavier mix could make this a cracking opening track.

Next up is ‘Cave In On Myself’ – sounds like an early Guns ‘N’ Roses bside in the verses and hailing back to Maiden in the chorus. The backing vocals have more of a presence in the chorus of this track and add that second dimension. Not as riff heavy as ‘No Dice’ but the drums and guitars begin to pull in a sound akin to Muse as the song progresses. As the song breaks down midway through, we get a subtle shift of gear leading upto an impressive solo which needs to be heard a little bit louder in the mix in my opinion. The surprising factor of this track is the closing section of an almost hymnal quality.

‘Sweethearts’ rides up next bringing the heavier side of the band back to the forefront. We are greeted with a riff heavy two minute wonder about a past relationship. Straight and simple rock track with Bruce Dickinson vocals and squealing guitar riffs to boot.

Next track ‘Destiny Has No Faith In Me’ provides us with an opening sector of drumming and guitars that remind me of an early Feeder sound. The chorus again pulls in an almost Muse-like quality which sounds great on record, particularly in the vocals which declare “It’s not the end of the world, it’s not the end of the world” which is something akin to what Mr Bellamy would be declaring in his stadiums. There is more emphasis (to my ears anyway) on the drumming within this track with the guitar a slight bit lower in the mix compared to the previous tracks.

The final track is declared as a ‘Bonus Track’ and is a bit of a nice surprise. ‘Remains’ is an acoustic track and really is a gem to end the e.p on. Without sounding too cliché, this is a track that Muse could have included on ‘Showbiz’. The vocals during the verses declare “Please don’t forget me, the time we had is fading” and sound very spookily like Matt Bellamy that I had to do a double take. The instrumental section in the track bizarrely sound like something Paul Weller could have recorded around the ‘Wild Wood’ era.

The band have just played their debut gig which was a showcase in Wolverhampton this weekend gone (Saturday 31st March) and should be announcing more dates around the Midlands soon.

To buy the EP as a download, visit their Bandcamp page here