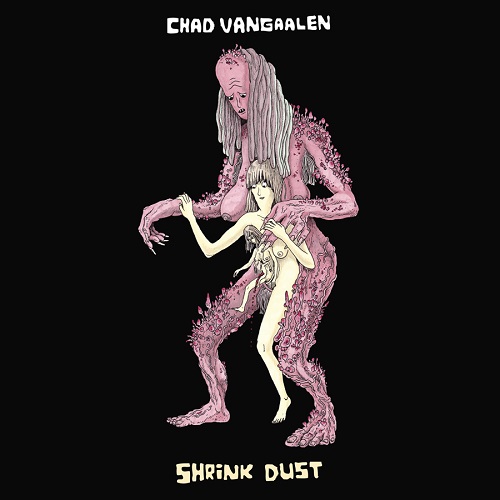 Canadian multi-instrumentalist and all around talented sod Chad VanGaalen is seemingly unstoppable. As well as producing six albums and four EPs in the last decade, he’s also managed to illustrate and animate his was through album covers and music videos galore. On latest effort Shrink Dust, his weird and wonderful brand of creativity shows no sign of slowing, or toning, down.

The album starts with the surreal ‘Cut Off My Hands’, whose opening couplet sets the tone rather nicely. “Cut off both my hands and threw them in the sand. Watched them crawl away like a pair of bloody crabs” he reflects, instantly throwing the listener into a sonic world as bizarrely recognizable and comforting as it is unnerving, and even threatening. The album’s lyrical focus is on the human body, its weaknesses and vulnerabilities, and its potential (an idea which also plays heavily in the album’s artwork). It makes for some truly mind-bending content, but then, from Vangaalen, that’s to be expected.

“Ripping my eyelids a little bit wider are two prying hands that grew out from my shoulders, and I can’t explain why, but it’s hurting my eyes” he sings shakily on the brilliantly visual ‘Monster’. The track’s driving acoustic arrangement, with carefully deployed slide guitars and a rumbling rhythm section, anchors the heady imagery of its monstrous metaphors. ‘Evil’ slows things down even further, taking a country-influenced jam whose multi-layered vocals and undulating guitars almost distract you from its insistent, chant-like repetitions of the song’s titular morality.

Musically, Shrink Dust is a warm, well-balanced mixture of a diverse mix of genres. Predominantly it’s the folk sound that wins out, with tracks like ‘Weighted Sin’ and the beautiful ‘Hangman’s Son’ sounding reminiscent of Bright Eyes, and The Shins in their more acoustic moments. There are plenty of psych influences in there as well. The trippy drum beats and resonant keys in ‘Where Are You’, for instance, compete with an echoing vocal melody, vying for dominance until the whole thing collapses and fades away into a truly spaced-out finale.

One of the album’s stand out tracks is the riotous ‘Leaning on Bells’, whose bass-led opening and crashing cymbals make it feel more akin to Kasabian or The Black Keys than its own folksier surroundings. “I will seek revenge for you” VanGaalen howls, before dropping into a Shins-esque vocal hook that provides temporary respite from the screeching, scuzzy guitars that rip through the rest of the track.

Shrink Dust is one of those rare albums that reveals new gems, new intricacies with every listen. VanGaalen himself apparently considers this to be a ‘country record’, but the reality is so much more interesting. The blend of genres, of voices on display is astounding when you stop to consider how seamlessly they’ve all been blended together.

With the news that the album is apparently going to function partially as the soundtrack for his upcoming sci-fi animation Translated Log of Inhabitants as well, there’s the potential of even more weird-and-wonderful-ness to come. All I can say is, bring it on.

Shrink Dust is out now via Sub Pop.